Some of the 2020-2022 Lincoln County Republican Central Committee Representatives. 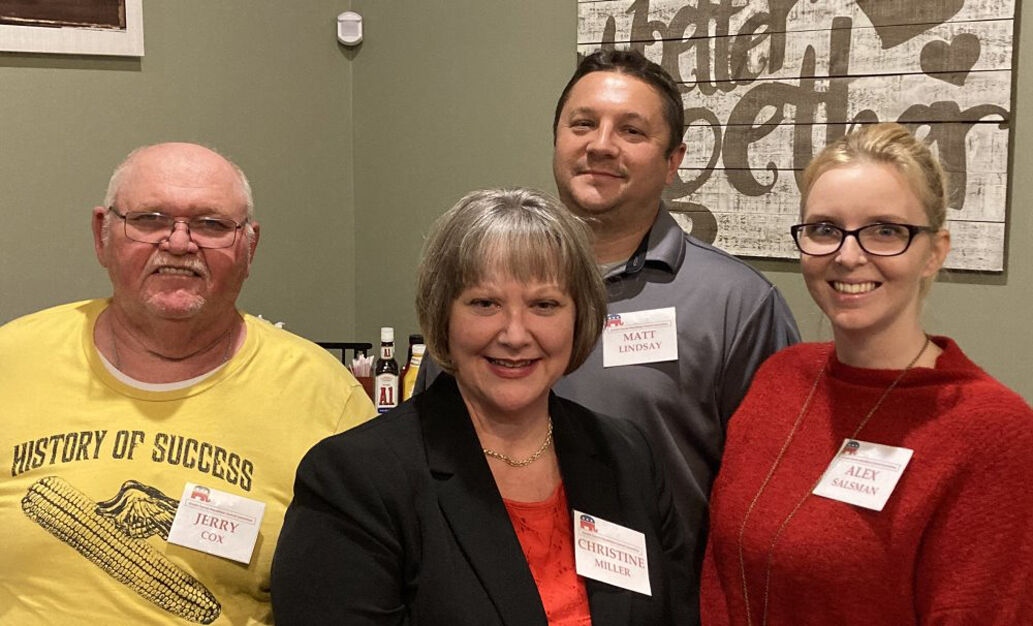 Some of the 2020-2022 Lincoln County Republican Central Committee Representatives.

The Lincoln County Republican Central Committee welcomed a number of new members as a result of the August 4th election.  The Committee saw a change in leadership as well at their re-organization meeting on August 18th.

Matt Lindsay of Waverly Township was elected the new Republican Central Committee Chairman. Lindsay, 39, is a life long resident of Lincoln County.  His wife Heather, their three children, and he attend Troy First Baptist Church, and is a member of Gideons International.  Matt continues to work the family farm with his father, while employed as the general manager for Magruder Paving.  He deals with state and interstate highway projects all across the state of Missouri and in doing so is no stranger to the intricacies of Jefferson City.  Matt has served on the AGC Heavy Highway Board and currently serves on the Board of Directors of the Missouri Asphalt Pavement Association.  Family, church, work, and now politics keep Matt a very busy man.

Enthusiastic in his new role, as Committee Chairman, Matt intends to promote the Republican platform and values while taking on the challenge of ensuring Republican victories in Lincoln County on November 3rd.

Alexandra Salsman representing Bedford Township was elected Vice-Chair.  Salsman is a political activist who is becoming quite proficient in running and managing candidate campaigns.  She is also out front in advocating for 2nd Amendment rights.

Christine Miller, newly elected to the Committee from Clark Township, was elected Secretary.  Christi is an ardent supporter of anything pro-life.  A longtime member of Missouri Right to Life, Christi was also volunteering on the ground floor of the Oasis Resource Center.

Jerry Cox of Nineveh Township was re-elected Treasurer.  Jerry grounds the new officers bringing his experience on the committee to the forefront. He also volunteers as auctioneer for any committee events.  Jerry owns and operates a small business.

Matt was please to introduce at the September 15th meeting, Tiffany Sauer of Prairie Township and Paul Edwards of Hurricane Township for consideration for appointment to the Committee.  Upon nomination and election, Matt administered the oath of office, subsequently filling all 26 Lincoln County Republican Committee seats.  A committee member remarked after the meeting that it was great to once again have all 26 Republican seats represented simultaneously.

The 26 Committee members range in age from 20 to 87 bringing with them many generational perspectives to current day politics.  Their occupational experiences also differ vastly and encompass laborers, farmers, tradesmen, educators, veterans, active and retired law enforcement and business professionals.  The collective heart of America is well represented among these elected individuals who have volunteered to represent the Republican Party on a local level for their constituents.  They do so not only in their townships, but in legislative, senatorial, and congressional districts also.

Perhaps you didn’t see their names on your ballot August 4th.  If their race is uncontested their names do not appear.  You can find your party’s township representative by going to the Lincoln County Clerk’s website at www.lcclerk.com. and looking under election results.  Your voter registration card will list your township and various legislative districts.  Wednesday, October 7th is final day to register to vote for the November 3rd presidential election.  Remember that every vote counts!

Chairman Matt Lindsay invites you to contact him at 636-299-7868 with your questions or concerns regarding the Lincoln County Republican Central Committee.