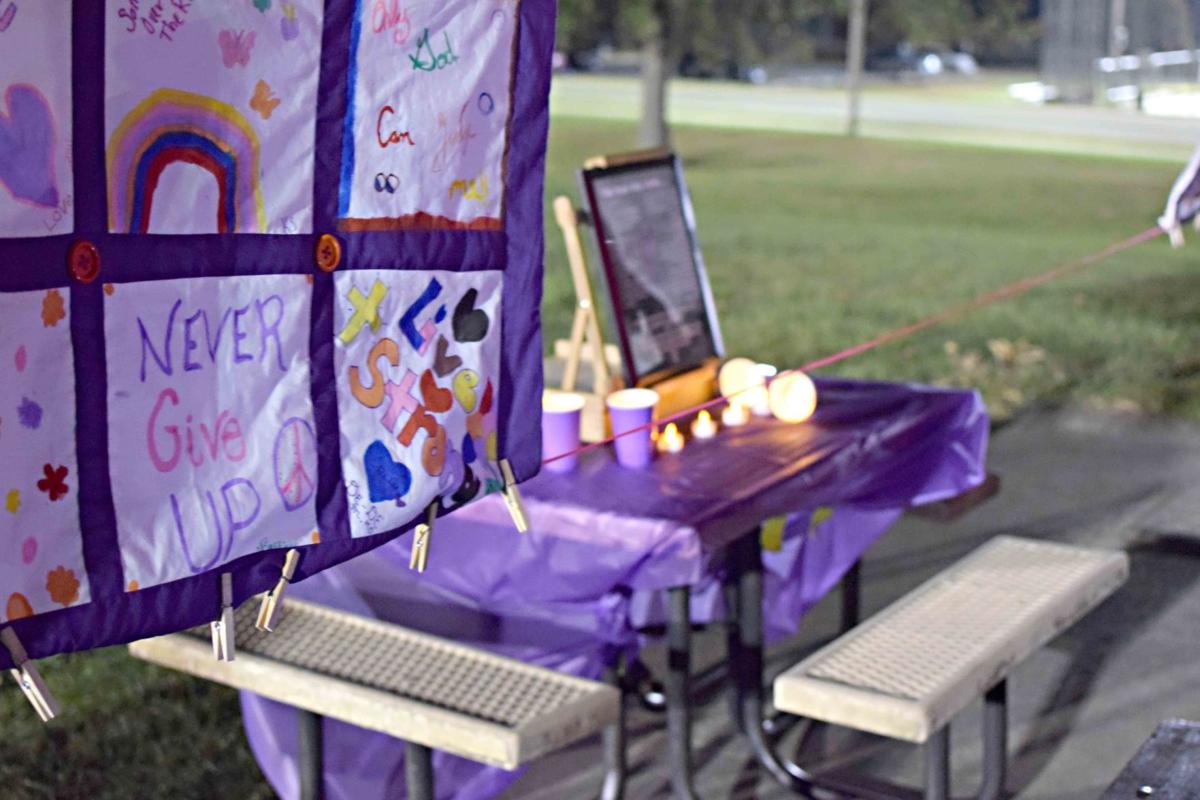 One of the quilts made for the Terry L. Robertson Center, hanging up at the Candlelight Vigil. 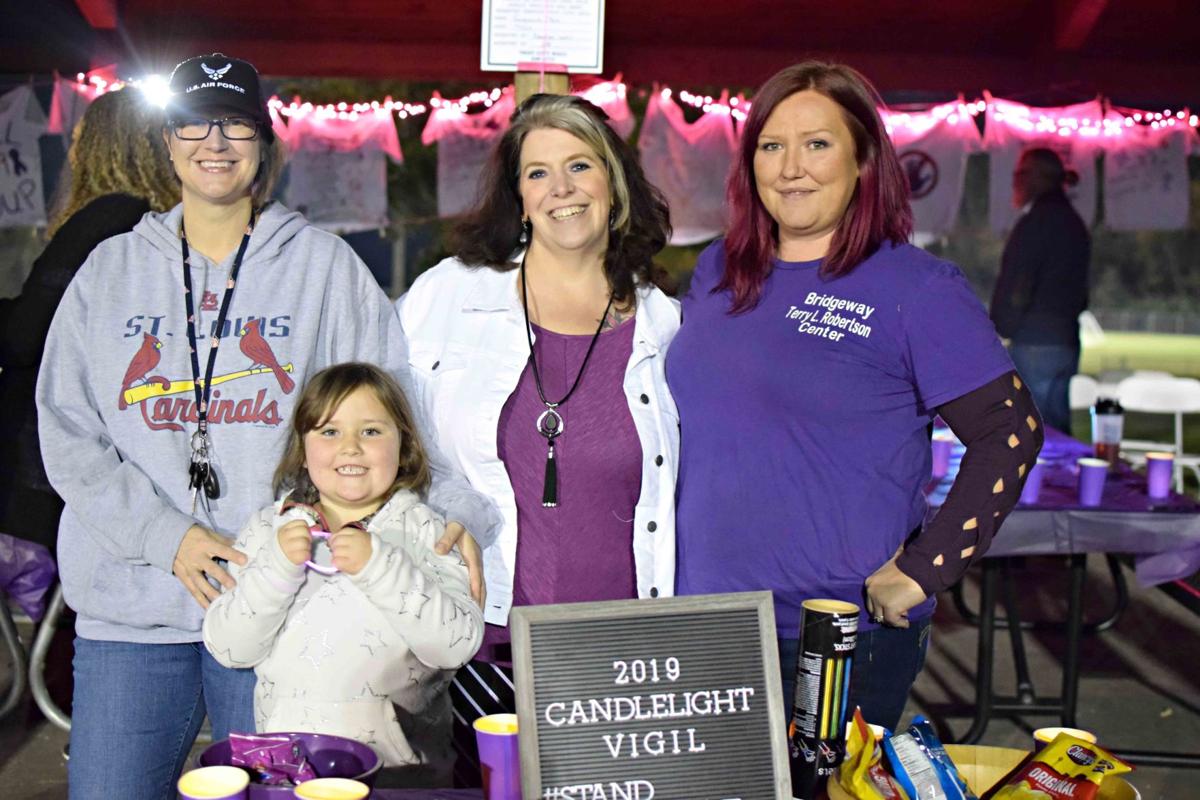 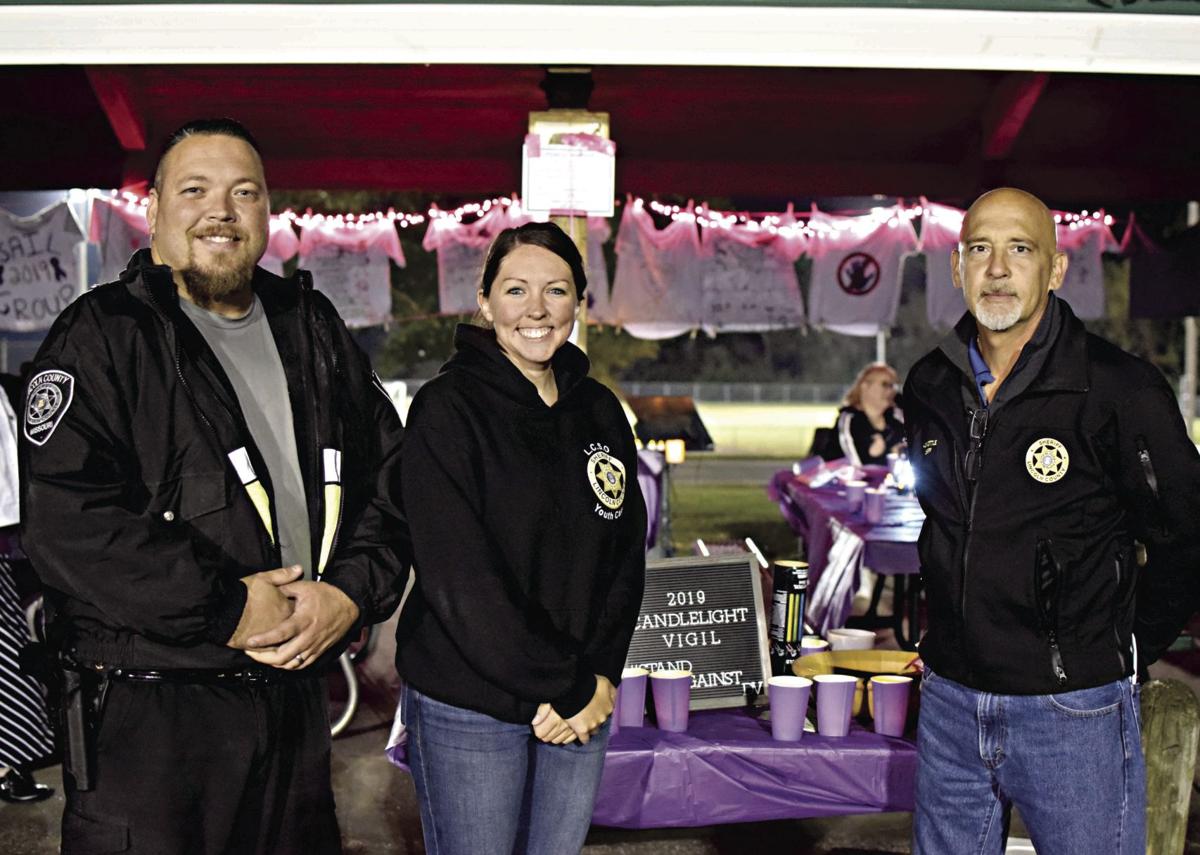 Capping off a month spent raising awareness of domestic violence and the issues it causes, the Terry L. Robertson Center held a candlelight vigil near the end of October, bringing the community together to fight the issue.

“We had a nice-sized crowd and a lot of good questions afterwards, and a lot of our community leaders in attendance,” said Mary Jones, community manager at the Terry L. Robertson Center. “It was a nice way to connect with everybody and talk about our services.”

Speakers including Sheriff John Cottle, Mary Sullivan-Thomas from Community Opportunities and Lincoln County Prosecutor Mike Wood, who all talked about the challenges with domestic violence in the area.

Rachel Lovelace, outreach specialist and case manager for the Terry L. Robertson Center, said she is proud of those three and the message they had for the attendees.

“We definitely feel the support from our community, and are very proud of them,” Lovelace said. “It feels like they definitely have our back all the time.”

Other prominent groups from the area, like the Lincoln County Fire Protection District, were also at the event, with Jones and Lovelace saying there was a lot of community buy-in.

The message that cut through the entire night was that the community does stand united when it comes to domestic violence, Jones said, and that it’s a subject everyone is taking seriously.

“The key to having a successful program is also incorporating our community leaders and these different agencies and programs, because at the end of the day we’re all serving the same clients,” Jones said. “Our goal is all the same, to provide services to people in need.”

Decorating the pavilion at Fairgrounds Park were quilts and t-shirts with different slogans and motivational phrases stitched and written on them.

“The t-shirt project is something we started last year after we reopened,” Lovelace said. “We were really starting to rebuild after being closed for a short amount of time. Those were all done by current and former clients, and its how they feel about what they experienced with their domestic violence.”

Some of the t-shirts were also made by a group of women at the Lincoln County Jail – a group that the center reaches out to provide services for through the Sheriff’s Office. The goal behind the “Clothesline Project” is to provide a way for these women to send a “message of hope” to others, said Jones.

“What did domestic violence mean to me, and how did I get through it?” Jones explained.

In Lincoln County, there have been 44 women and 26 children served in-shelter  at the Terry L. Robertson Center since January 2019.

“We average between 35 and 50 hotline calls a month,” Jones said. “The total between May and September of this year is 231, and also this year we’ve enrolled 55 new clients in our outreach program.”

The outreach program includes all the regular functions of the center except for housing.

“They still receive help on resources, court advocacy as needed, all the components are still there, but they’re not staying in-shelter,” Jones said.

The outreach program also serves both men and women, Lovelace said, where the shelter is women and children only. There are many more women than men using the center’s services, however there are people of both sexes seeking help from the center.

“We do have men that we work with…those men are always what we consider an outreach client,” Jones said. “They may be looking for help with an order of protection or a child order, a lot of times they’re even reluctant to consider themselves a victim of domestic violence – there’s the masculinity that comes into play. It’s harder for them to think about it in that respect.”

Encouraging anyone who’s suffered abuse to take the first step forward and get help is difficult. Sometimes it can be hard for a victim to pinpoint when exactly the abuse started, Jones and Lovelace said, and there are occasions where a person will call the center, and not even know why specifically they are calling.

“A lot of times when they call in on the hotline, one of our roles is to be a listener, so listening to what they’re telling us, listening to what their situation looks like, and asking those questions to determine what kind of help [they’re] looking for,” Jones said. “A lot of times when they call they don’t even know why they’re calling, they just know they need help, they just don’t know where to start.”

The hotline for the Terry L. Robertson Center is (636) 224-1850, option 1. The hotline is open 24 hours a day. To learn more about the center, visit its Facebook page at www.facebook.com/terrylrobertsoncenter.