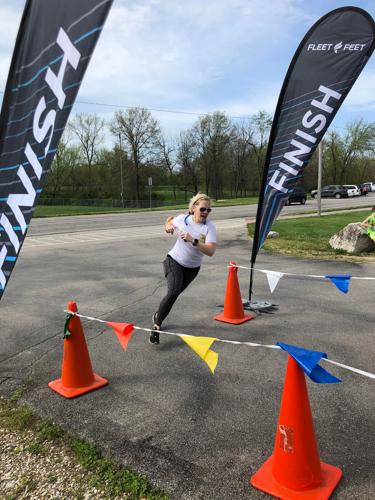 A contestant rounds the corner heading towards the finish line.

A contestant rounds the corner heading towards the finish line.

Troy, Mo. - Rise, shine and run on a Saturday morning?

The citizens of Lincoln County stepped up to the task at a charity five kilometer run on April 23, with the proceeds going to the Troy Police Department’s K-9 unit. The unit responded in kind with a doggy demonstration showcasing their canine’s capabilities for the public.

The five Kilometer run started with registration at 8:00 a.m. and was managed by the T.R.C. (Troy Running Club). Current Alderman ward II David Norman is the president of the club, which he started almost a decade ago. Years prior, responsibilities for managing races were handled by a company designed for that sole purpose. Recently however, Norman started renting the equipment, getting the event permits and arranging the route himself, with the aid of various members throughout the community.

Sergeant McCallister, of Troy P.D., reached out to Norman about the idea, which was then followed up by officer Todd Allan. In just the span of seven weeks, the action items to prep for the race were accomplished, and by 8:45 in the morning, almost 100 runners were ready to go. The temperature was warm with a brisk and whipping wind; thankfully the sun was out to brighten the day.

The event was an even mixture of competition running and charitable support. Many people competing were children, siblings, workmates and even a mother pushing a stroller on the 5k. On the more competitive side, several serious runners throughout the community including T.R.C. members ran to win.

The race was a there and back event from the duck park on Monroe street, and included going to Third Street, hooking around the block on Withrow, sallying down Second Street to Pershing and cutting back to the park. For the men, Shannon Richnak (of T.R.C), Blake Tharp and James O’Brien came in first, second and third respectively. First, second and third for the ladies were Taylor Cox, Rachel Lofland (of T.R.C) and Tara Stout.

As a charity event, the proceeds were donated to the Troy K-9 department, which is privately funded. In total, the race raised over $3,500 for the K-9 division, over $2,000 of which came from raffle tickets. The charitable aspect of the event was managed by St. Michael’s Army (SMA), a non-profit organization that supports police officers based in the St. Louis metropolitan area. Boyer Academy, Redbird Concrete and RDJ Entertainment managed set up and tear down, water for the runners and music and media for the race. SMA shared their hope “for this event to triple in size next year,” stating that, “It was a blast.”

Norman says he also “hopes to make it a yearly event,” and that, “[SMA will] have the support of the Troy Running Club.” The enthusiasm that the club and SMA brought to the event was matched by a surprise police helicopter flyover. Norman ran with the U.S. flag, on which he shared, “[Its] just something to boost moral; something that [brings us] all together, [something] we can get behind.”

To top off the event as a community draw, the K-9 unit put on a demonstration. The dogs, Luna and Kilo, sniffed for drugs and Kilo attacked a padded officer.

This showcase prepped the dogs for another presentation on the upcoming Monday. The K-9 unit, which is not budgeted for by the city of Troy, is sustained by private donations and charity events such as this one.

Sgt. McCallister and the other P.D. present were very grateful for the event, and hope to raise awareness about K-9 units and their rolls in keeping the community safe.