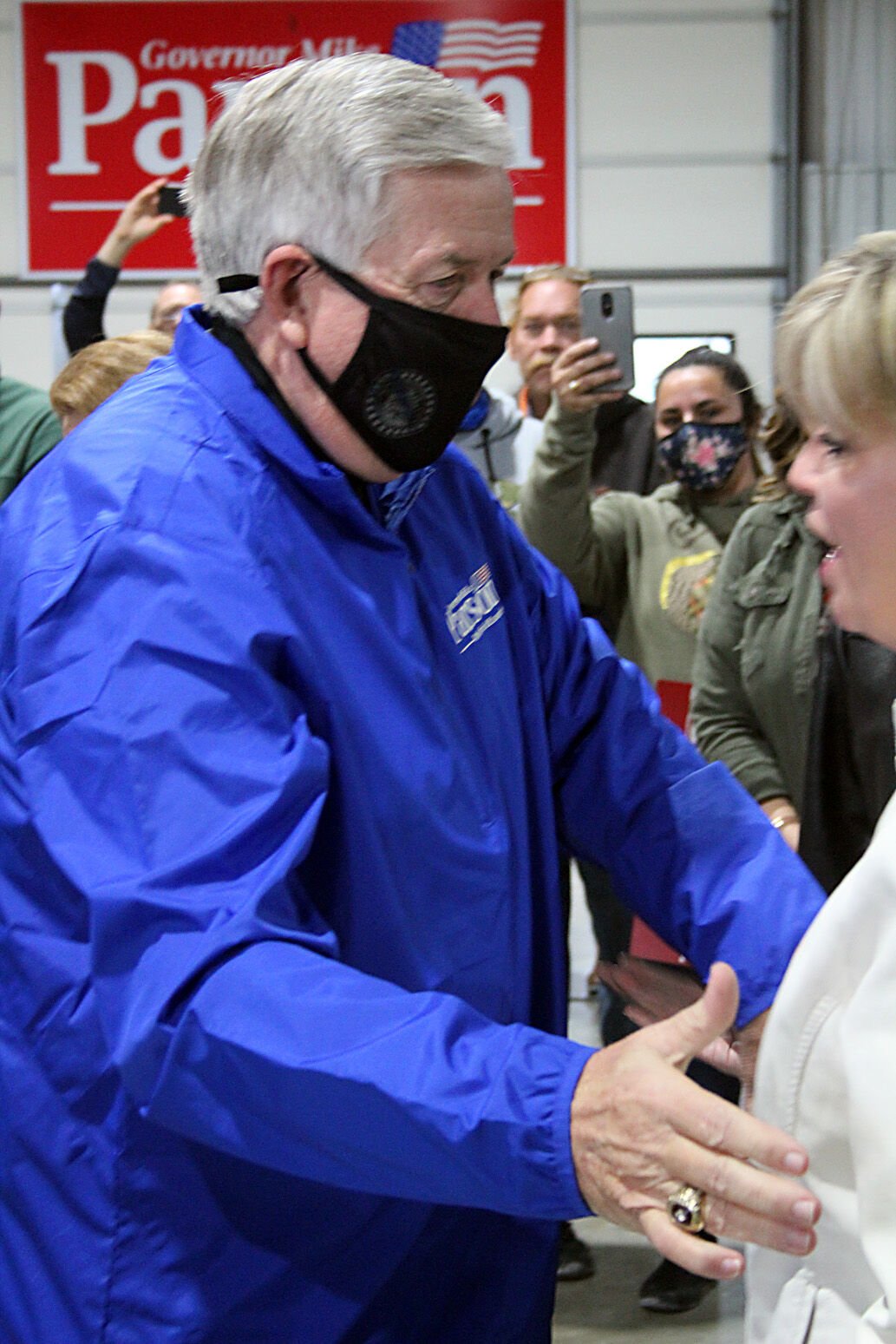 Gov. Mike Parson meets with a supporter at a campaign rally at Brooks Brother Trailers in Troy on Oct. 27. Parson, along with Secretary of State Jay Ashcroft and Attorney General Eric Schmitt, also gave speeches as part of their reelection campaigns. 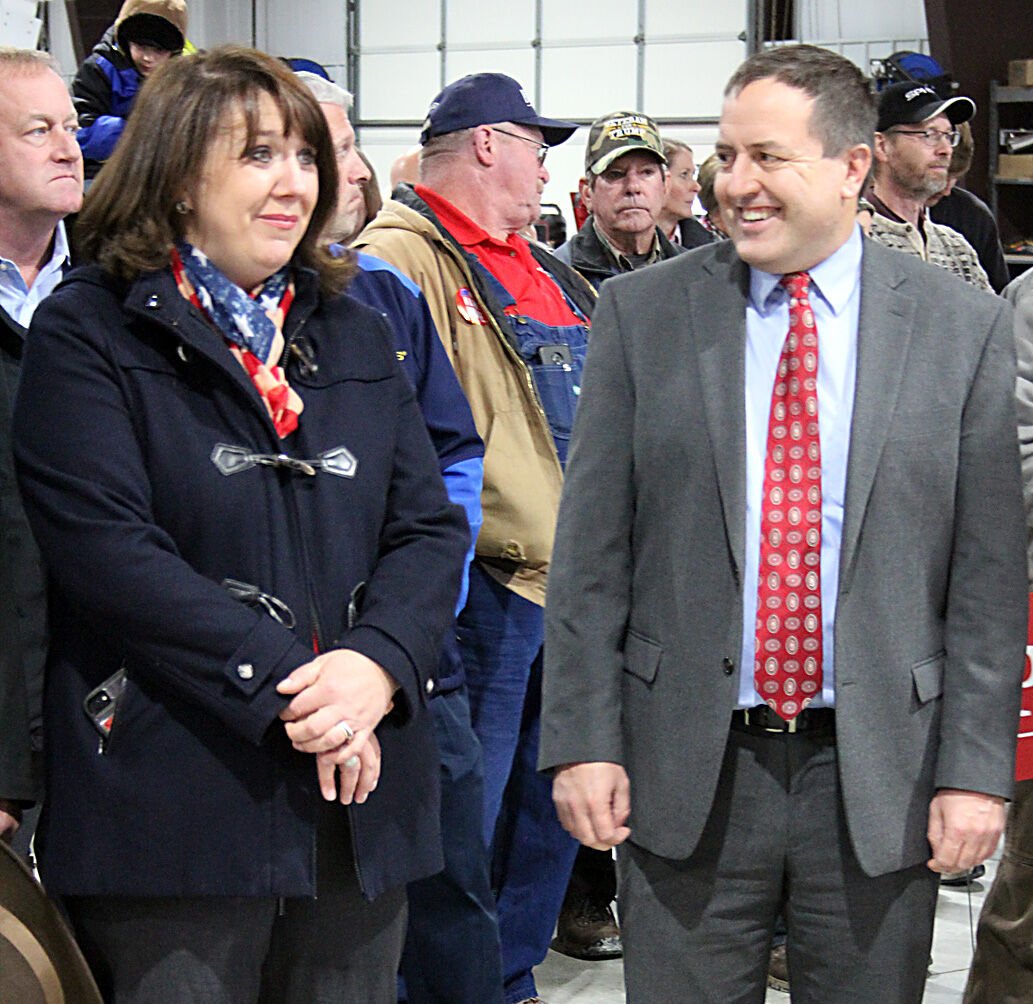 Gov. Mike Parson meets with a supporter at a campaign rally at Brooks Brother Trailers in Troy on Oct. 27. Parson, along with Secretary of State Jay Ashcroft and Attorney General Eric Schmitt, also gave speeches as part of their reelection campaigns.

The staff at Brooks Brothers Trailers in Troy got some welcome visitors on Oct. 27.

Gov. Mike Parson, Attorney General Eric Schmitt and Secretary of State Jay Ashcroft all landed at the factory during a campaign tour of the St. Louis metropolitan area to make their respective cases for reelection as time runs short before the Nov. 3 elections.

“Troy is an important city to me,” said Parson, who took office after the resignation of Eric Greitens in 2018. “(The people) believe in the same things I believe in. They believe in working hard, and the American Dream.

“The values we believe in are working hard, believing in one another and Christian values. Those are Missouri values, and that’s what Missouri voters want.”

Parson has started to pull away from his Democratic challenger, State Auditor Nicole Galloway, with polls showing leads between six and nine points.

“I think staying on message is important,” he said. “Dealing with the (COVID-19) virus and getting people back to work are important.

“People (in Missouri) understand if you support law enforcement and the military – and the message we want to send to them.”

Roger Moran, owner of Brooks Brothers, took over his father’s welding shop when he was 18 years old in 1975, and bought into the company’s brand six years later. The company now has 110 employees, and several are family members.

He said Parson represents his belief that faith and hard work will result in success – and that’s why he was proud to have the governor come to his company to have a rally.

“We’re thrilled to death to have (Parson) come here. We’re conservative Republicans, and we believe in everything that Parson believes in,” Moran said. “(My wife and I) have nine kids and 13 grandkids, and many of them work here (at Brooks Brothers).

“I think (Parson) comes from a very similar place from where I came from. He came from a farm and worked his way up to where he is now.”

Attorney General Schmitt told the crowd of Brooks Brothers employees, their families, and state and county representatives the recent confirmation of Amy Comey Barrett to the United States Supreme Court will bring America – as well as the state – back to a time where the law was interpreted as it was written, not the way Democrats want it to be.

“That’s what’s at stake: the future of our country, the things we believe in. Our founders believed that all of us were born free,” Schmitt said. “Government is just there to protect our rights, and part of my job as attorney general is to fight for you, and protect your rights.”

Schmitt shared a story about his time serving with Parson in the General Assembly, and pledged his support for Parson’s election to a full-term as governor.

“You get to see people in all kinds of different situations when you serve in these capacities, in good times, in bad times and in challenging times,” Schmitt said. “This governor is a leader. He leads with his heart. He’s a decent, honest human being – and we need Mike Parson for another four years – I’ll tell you that right now.”

Ashcroft agreed with Schmitt, saying the election is about all the amendments and the rule of law in the country. He added voters owe it to the next generation to vote for Republicans, so it was paramount to vote for Parson.

“Four years ago, it was bleak. The left wing, the coasts, the media were with (Hillary Clinton),” Ashcroft said. “But America wasn’t. America stood for common-sense values, for the rule of law, for opportunity for everyone.

“Now is our time to do it again, and I want to ensure that you do it so future generations don’t say “why?” Why didn’t you make sure we had the opportunities you did? You have the opportunity. You can do it, and frankly there will be nothing more glorious than watching CNN four years in a row when they announce Donald J. Trump in tears with mascara running, when they see Mike Parson elected and they see a red wave across this country.”

Parson said the last eight months have been challenging, but he will keep working for the people of Missouri, in rural areas such as Lincoln County as well as the larger areas.