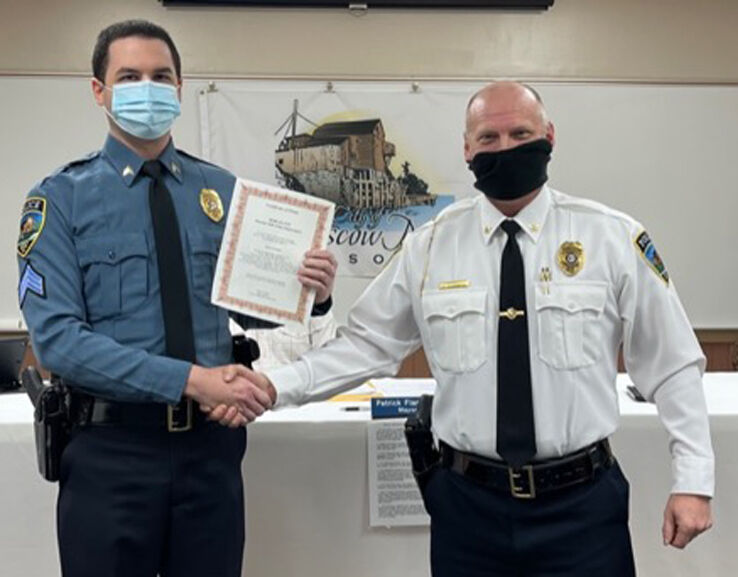 Jason Graham, left, is being congratulated by Moscow Mills Chief Terry Foster after Graham’s promotion to Sergeant at the city’s Board of Alderman meeting. 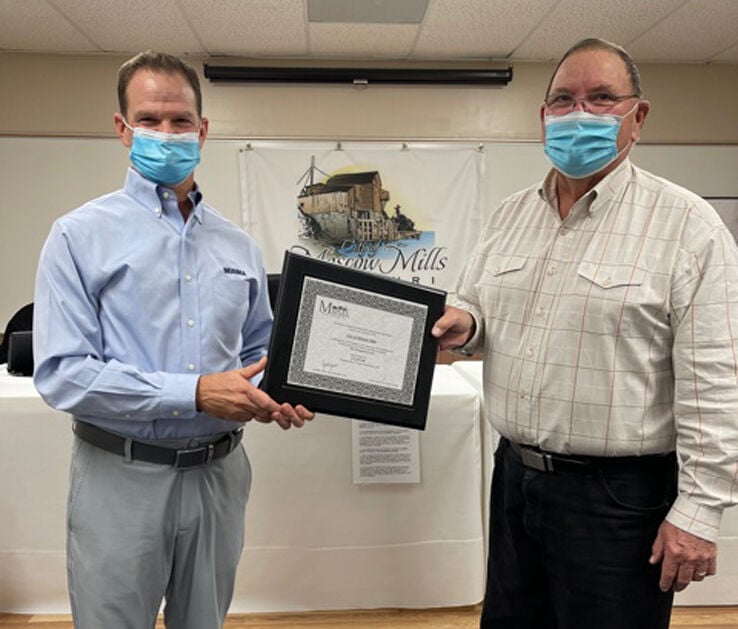 Kelly Beets, a representative from Municipal Interlocal Risk Management, left, presents Moscow Mills Mayor Patrick Flannigan a grant to the city for $2,933.40 to help cover the cost of body cameras for the police department.

Jason Graham, left, is being congratulated by Moscow Mills Chief Terry Foster after Graham’s promotion to Sergeant at the city’s Board of Alderman meeting.

Kelly Beets, a representative from Municipal Interlocal Risk Management, left, presents Moscow Mills Mayor Patrick Flannigan a grant to the city for $2,933.40 to help cover the cost of body cameras for the police department.

Two major events occurred at the most recent Board of Alderman meeting for the City of Moscow Mills.

The city’s police department promoted Officer Jason Graham to the rank of Sergeant. Graham is a seven-year veteran of the department who has served in many administrative capacities, including being in charge of records, evidence, computer/technology work and many other special assignments that have come along the way.

Some of those include policy manual updates, corrections and additions, rewriting the traffic codes and traffic control devices for the city as well. Graham has also never missed a day of work in his career.

“After putting in the work for so many years, it’s nice to have the responsibility,” said Graham, who has a bachelor’s degree in computer information systems from Lindenwood University in St. Charles.

“He’s very thorough,” Moscow Mills Police Chief Terry Foster said. “He does a great job, and that’s why we promoted him.”

Graham will be in charge of all night shift patrol officers. He said it’s a good shift working with good officers he already knows at a good police department.

“It’s not bad,” he said. “I helped train both of the guys I’m working with, so it’s a continuation of that.”

Despite his technological knowledge, Graham, who was born in Wright City and raised in St. Charles County, has always seen law enforcement as his future.

“I’ve known (Graham) since he was 14 or 15 years old, when he was in the Police Explorers Program in Lake St. Louis,” Foster said. “He’s wanted to be a police officer his whole life.”

“It was always something I wanted to get into since I was a kid,” Graham said. “I did some computer stuff as a programmer when I was in college, but it didn’t work out for me as law enforcement did.”

In addition to Graham’s promotion, the city was presented with a grant from Municipal Interlocal Risk Management for $2,933.40 to help cover the cost of body cameras for the police department.

Moscow Mills Mayor Patrick Flannigan said the use of body cameras by police not only protects the public, but the officers. It also lowers liability payouts for companies like MIRMA.

“It’s to their advantage,” Flannigan said. “What (MIRMA) has to pay, and what we have to pay (for the body cameras) is a mutual benefit for both parties.”