Sign Up
Log In
Purchase a Subscription
You are the owner of this article.
Edit Article Add New Article
Home
News
Sports
Living
Announcements
A & E
Special Sections
Classifieds
Obituaries
Missouri Marketplace
The Job Network
1 of 2 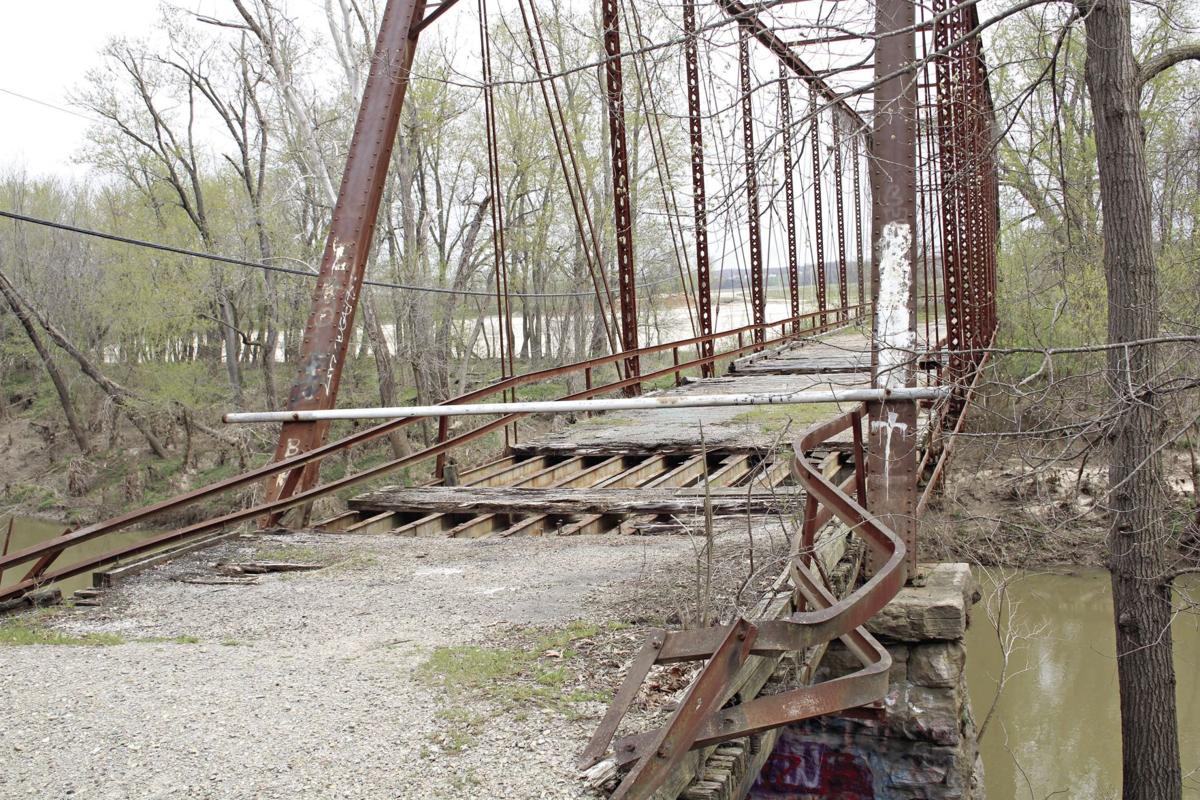 The Moscow Mills Bridge, barred off, is quite a precarious path. File Photo 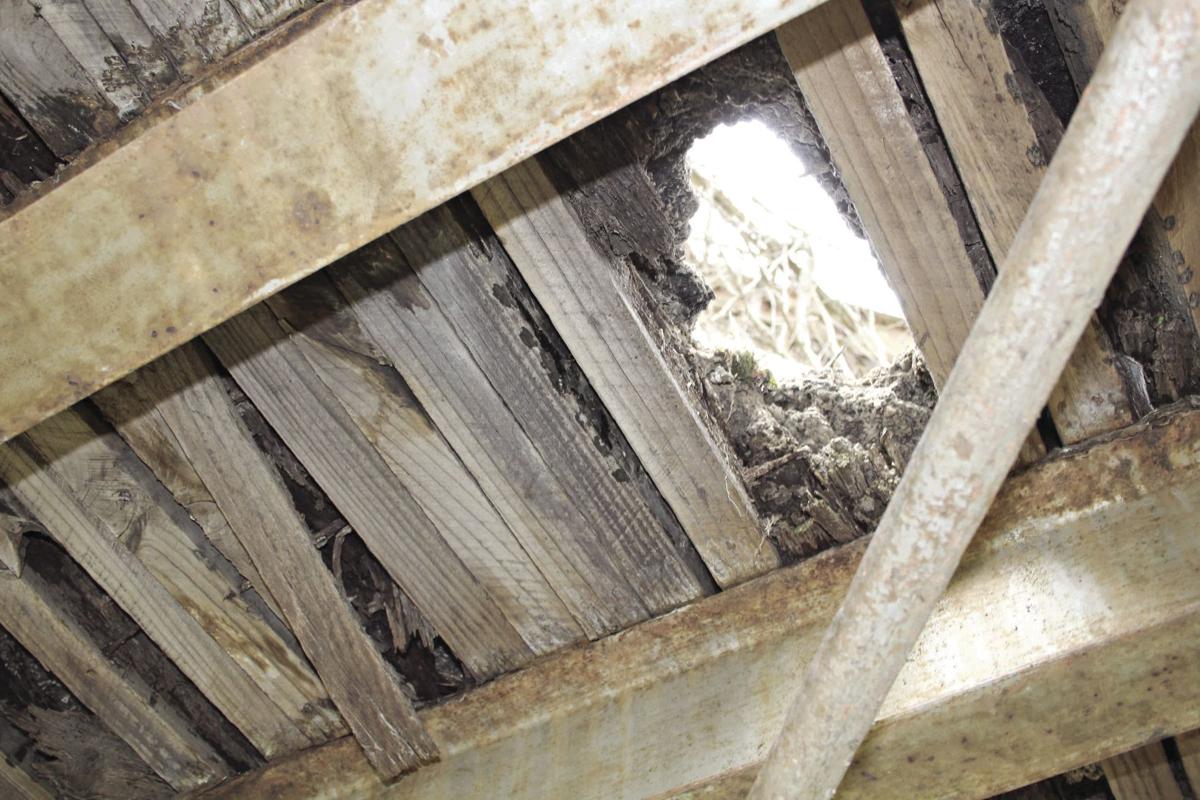 A view from the underside. The bridge is not the sturdiest thing to walk across. File Photo

The Moscow Mills Bridge, barred off, is quite a precarious path. File Photo

A view from the underside. The bridge is not the sturdiest thing to walk across. File Photo

At the end of County Road 814 in Moscow Mills sits a 134-year-old bridge. Over 215 feet long, it’s superstructure is a 177-foot pin-connected Pratt-through main truss span. It’s one of the last of its breed in the state of Missouri – and it’s up for grabs.

The Missouri Department of Transportation has named eight bridges across the state that it is looking to turn over the ownership to, for the low price of free. These range in size from giants like the Buck O’Neil Bridge, which crosses the Missouri River at Kansas City, to smaller structures like the Moscow Mills Bridge. The catch is that the bridges must be maintained, and their features giving them historic significance preserved. The new owners are also responsible for the legal and financial requirements that go along with it.

The Moscow Mills Bridge was built in 1885, and Missouri Department of Transportation Historic Preservation Specialist Karen Daniels said it is one of the last wrought iron bridges left in the state.

“It’s one of the few bridges left that was constructed by that particular contractor [Raymond and Campbell],” Daniels said.

According to a MoDOT fact sheet, between 1819 and 1880, Lincoln County used ferries to transport wagon and horse traffic across the Cuivre River.

Early in 1885, the construction of an all-metal bridge across the Cuivre River was discussed with a strong emphasis on building a bridge at Moscow Mills, Frenchman’s Bluff and Rig’s Ford. In the summer of 1885, survey work was conducted to locate a site appropriate for a bridge spanning the Cuivre River at Moscow Mills. The contract for the bridge was awarded to Raymond and Campbell, which was the lowest bid at $3825.

The bridge was fabricated by Carnegie Steel and later erected by Raymond and Campbell. It was the first all-metal span across the Cuivre River in Lincoln County.

A second all-metal bridge was constructed at Frenchman’s Bluff a year later. The Moscow Mills Bridge was damaged from heavy floodwaters in the winter of 1890.

The riverbanks were washed away around the bridge, resulting in extensive repair work on the bridge.

As it sits now, the bridge is in a dilapidated state. Mayor Patrick Flannigan of Moscow Mills said its condition has made it very much a safety concern for the city.

“10 years ago someone was trying to do a small rehab, make it a foot bridge, but that never came through, in the meantime it’s just continually falling even farther into a state of disrepair,” Flannigan said. “Kids like to go out and play on it, and it’s just an accident looking for a place to happen.”

The Moscow Mills Bridge’s age and construction style make it eligible for listing on the national registry of historic places, and while the bridge could be renovated in place, it could also be redeployed in a number of practical uses. It could be disassembled, moved and rebuilt for use on trail or a piece of property in need of a bridge.

“It’s wide enough that somebody could actually use it if they redecked it,” Daniels said. “A pedestrian path would be a great opportunity, it would be great on a pedestrian trail or a bike trail. It’s potential for reuse is basically limited by the imagination and by peoples’ budgets.”

Sometimes parks will buy these historic bridges for use on trails; other times the use of the old structures is more unique.

Daniels said recently a museum made a proposal to relocate a historic bridge to use in the road leading to the museum’s doors.

“Most of them are used for pedestrian purposes, or if somebody actually has a need on their private property to cross a small stream,” Daniels said. “And most of the bridges that get relocated tend to be smaller bridges, the 50, the 75-foot, or the very, very old really significant bridges like the old bowstring arches.”

The person who had attempted the Moscow Mills Bridge renovation passed away, Flannigan said, and no one since has picked up the ball.

“The city doesn’t have the funding to be able to do it,” Flannigan said.

MoDOT has more information on the bridge and the process of claiming it on its website at modot.org/free-bridges, though Daniels warned that taking over a historic bridge is not an easy proposition.

“The thing is, you need to take the time to actually think out, ‘how am I going to do this?’” Daniels said. “Because it’s not an easy proposition to relocate a bridge. It’s best to get support, especially if it’s a community effort, to make sure there’s a lot of buy-in.”

“Bridges are landmarks,” she continued. “They tend to be community icons, and to save a historic bridge for whatever purposes that they are reused for, tends to enhance a community.

“Somebody has to agree to take over maintenance and liability for it, and to preserve the character-defining features of it.”