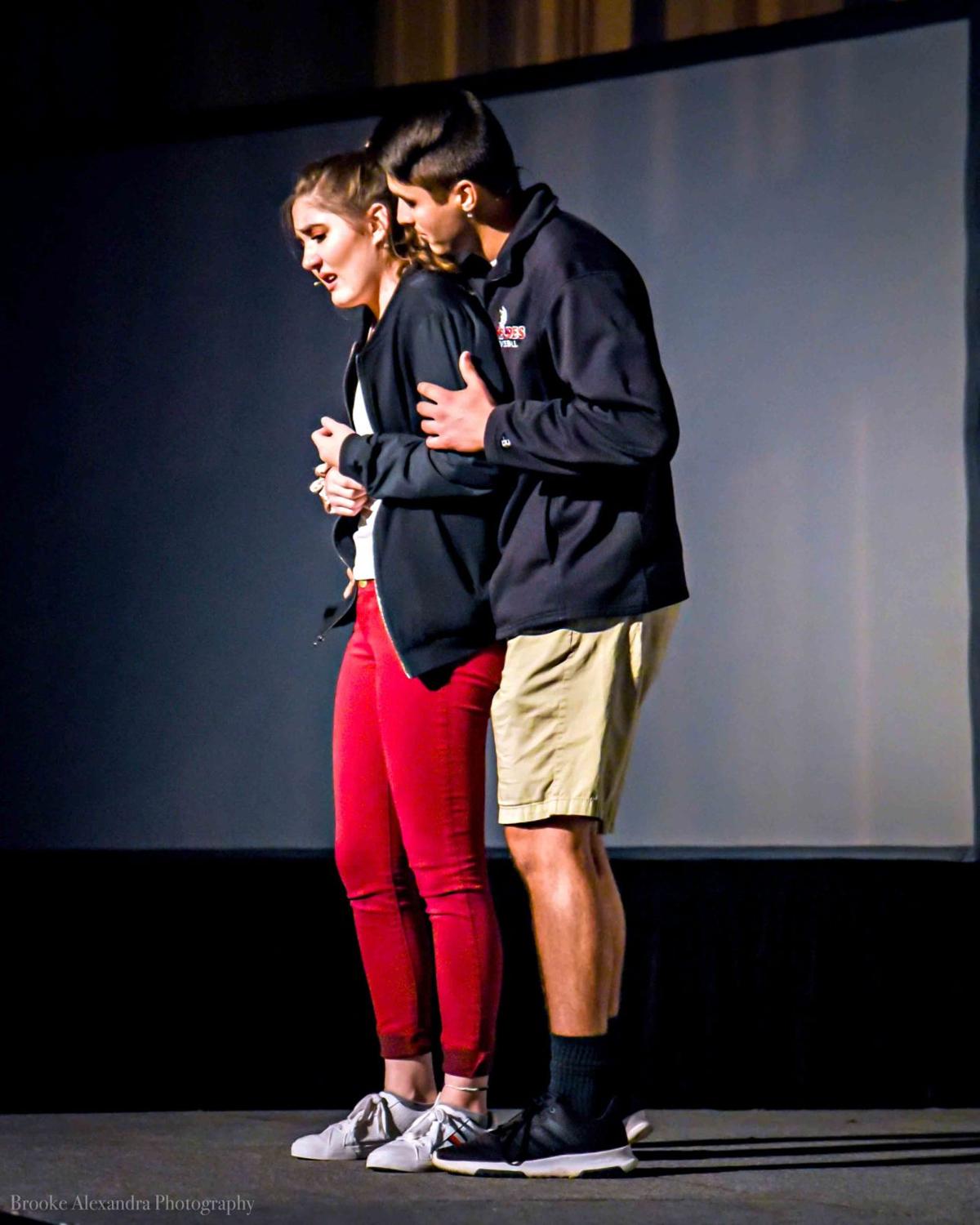 Winfield Senior Shiloh Allen plays her part in one of the On-Stage team’s in-school performances. 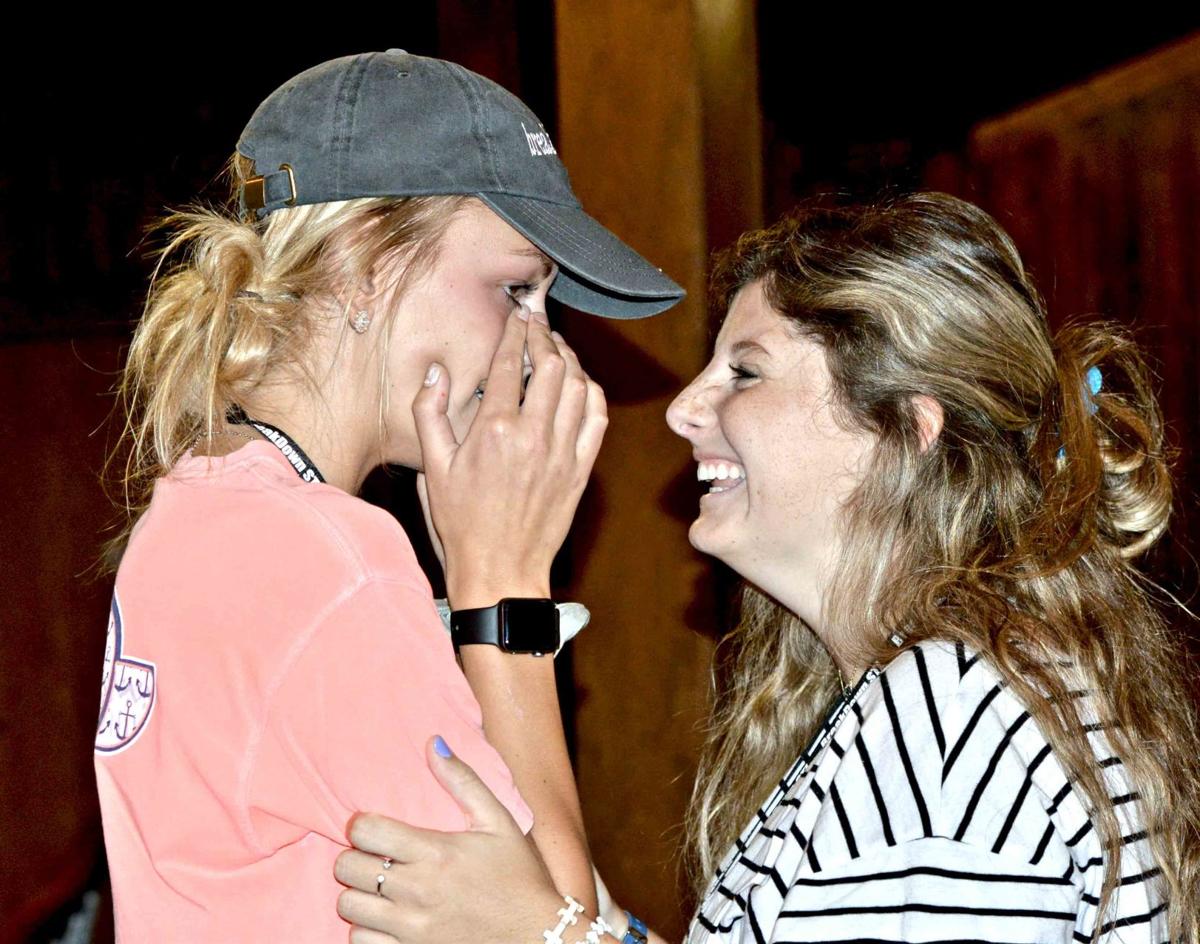 To help fellow teenagers combat these challenges on a peer-to-peer level, over the years, a number Lincoln County students have worked with the Chesterfield-based organization BreakDown STL. Started in the St. Louis Region in 2006, BreakDown sends high school and college-age students into 70 area schools to serve as peer mentors and perform community outreach. The 55-60 students involved in BreakDown are split into two groups: the On-Stage team and the Off-Stage team.

Shiloh Allen, a Winfield High School senior, is part of the On-Stage group. That half of the organization will put on theatrical assemblies at schools – involving acting, dancing and singing – that portray some of the difficult topics facing the teens in many of these schools.

Allen has gone through a number of different roles; last year she portrayed a victim in an abusive relationship, and this year she is playing a character that is date raped and is struggling with self-harm.

“Each character represents something,” Allen said, adding that while the subject matter can be hard-hitting, the schools are informed about it ahead of time so students aren’t blindsided.

“It is a very heavy presentation, but it’s very needed, because just getting those things out in the open is better than leaving them in the dark,” Allen said.

Allen has taken part in BreakDown performances at Winfield High School, and she said it was “pretty daunting” to have those heavy conversations with people that she knew well.

The payoff, though, is the chance to help someone.

“Even if it’s just for one student, it makes it all worth it,” Allen said.

Kamryn Mennemeyer, who graduated from Troy Buchanan this past May, was on the Off-Stage team for BreakDown, which focuses on peer-to-peer mentoring and counseling.

The Off-Stage team members are split up into groups about seven kids strong, and sent to schools throughout the region.

Mennemeyer was placed in Hillsboro High School, and went back each month with her teammates.

“We would go talk with the kids at lunch tables, see how their day was going, invite them to come to our lessons, and then we would share a lesson during their study hall time or lab time,” Mennemeyer said.

“Just all the different topics that come across high schoolers in their daily lives,” Mennemeyer said.

The Off-Stage team gives lessons, holds activities and then leaves time at the end to speak one-on-one with the students to see how the lesson impacted them, and to hear their perspective.

“Hopefully getting them to be vulnerable and open up to us as we’re a safe person to talk to,” Mennemeyer said.

“But as the school year went on and you would remember their name or if you would greet them…they became more vulnerable and more like, ‘okay you are a safe person,’” Mennemeyer said. Other peer-to-peer groups went to other schools, including one that came to Troy Buchanan.

It could be difficult at times too, Mennemeyer said, to work with students her own age and “then telling them that you’re going to walk alongside with them to get through it.”

While that may have been the hardest part, Mennemenyer said second to that challenge was knowing that several members of Breakdown’s team had survived hardships of their own.

Cyra Lohman, BreakDown’s executive director, said there was one BreakDown member that had just gotten clean off a heroin addiction before he joined, and had dealt with an abusive father.

“And this was a kid with a lot of money in West County,” Lohman said.

This student knew he wanted to live differently, Lohman said, and was lost despite growing up in a well-off, two-parent home.

Despite wanting to stay clean, that young man started with a bit of an edge to him Lohman said, but now in his third year with the program, he’s become a leader for others in the program and embraced his role with the group.

The topics covered by the BreakDown students varies, depending on the school and what that school’s principal and guidance counselors suggest as the most relevant issues.

“The principals will tell us what their students are really struggling with at that time,” Lohman said. For example, one school had three suicides, and the counselors there dealt with over 30 students coming in dealing with depressed and suicidal thoughts.

“So we just really hit that hard,” Lohman said. “Another school, Kirkwood – heroin overdose and fentanyl death, asked us to hit that hard.”

Going to schools in more rural areas, Allen said the students are more open than those living in more densely-populated areas.

“Growing up in Winfield, kids are very open, like ‘oh my parents do drugs,’ and you just grow up with that,” Allen said. “But you got to West County – say I went to Lafayette – they would be very, very, very quiet about that.” After performances, students will engage the BreakDown members, and Allen said there too she and her team members will try to encourage them to speak with counselors.

Students will sometimes even reach out via Instagram or through other social media apps to talk with members of BreakDown privately.

The BreakDown members go through training sessions every week, and have been coached on how to handle situations dealing with those students, and how to help coax them into reaching out to talk to a professional counselor about whatever problem they are combatting.

“Because we’re still teenagers ourselves, we’re still in college age ourselves, so we will give them as much knowledge as we know…but then we’ll recommend them to go to a counselor,” Allen said. BreakDown also has an in-house counselor, if a student is uncomfortable talking to an adult at their school.

Beyond the external assistance the teams provide, internally, BreakDown also has a mission statement to improve the members of its organization. Students participating agree to follow a standard of conduct and promise to live “counter-cultural lives,” meaning they live cleanly. There are high expectations of character fitness, Lohman said.

“You learn how to become confident in yourself and what you stand for,” Allen said. “My core beliefs have become so much more big to me.”

Allen said being on the team has helped her with her faith, staying true to that, because participating in BreakDown teaches students to be solid in what they believe in.

“Don’t let society push back on anything,” Allen said. “Having that, having people support me, has helped me stand firm in my beliefs as a Christian.” For Mennemeyer, two things stick out to her about her time with BreakDown. The first was that she’s discovered how much potential she actually has, and after BreakDown pushed her out of her comfort zone, she has a better handle on her confidence, people skills and ability to push herself. The other was recognizing that everyone has issues they are struggling with.

“The world does not revolve around yourself, you need to be there for other people as well,” Mennemeyer said. “So it really helps me not be self-centered and realize that there are a lot of important people and great people to meet out in the world.”