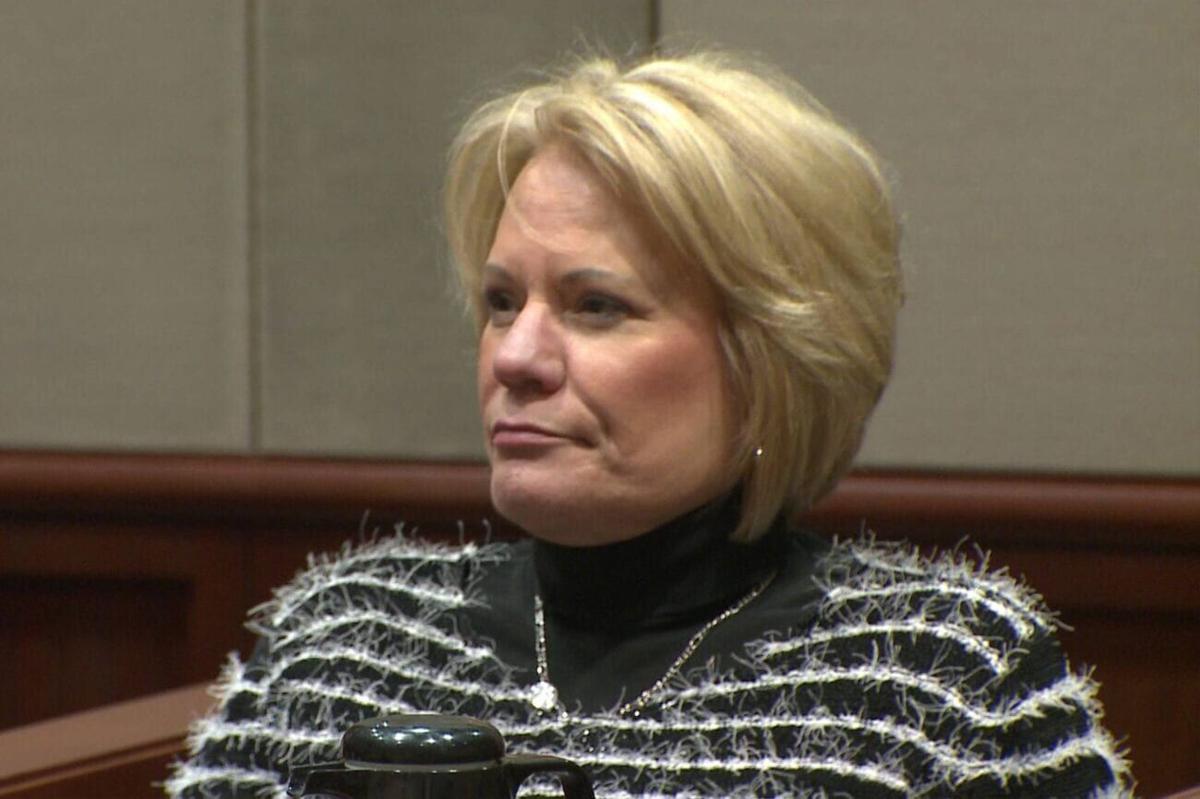 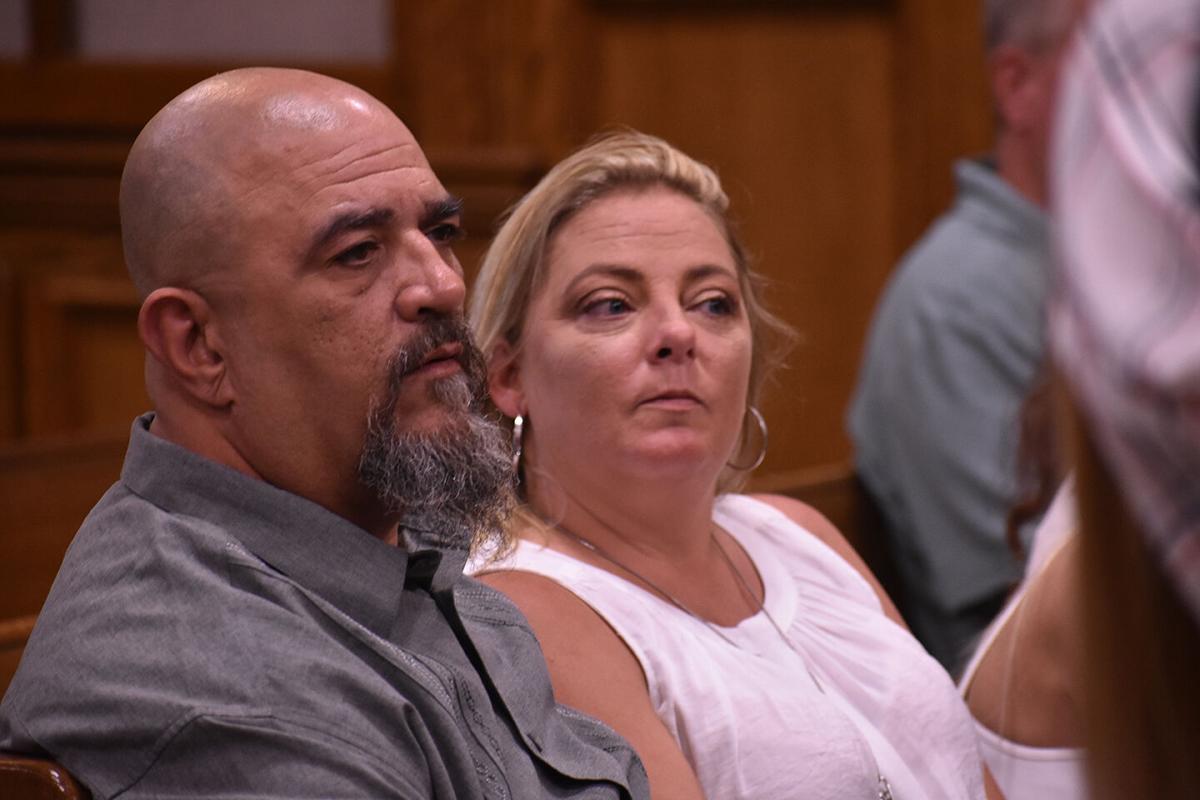 Russ Faria, left, sits beside his girlfriend, Cindy McAfee, as they listen to Lincoln County Prosecuting Attorney Michael Wood's press conference announcing first-degree murder charges against Pamela Hupp for the murder of Russ Faria's wife, Betsy, on Dec. 27, 2011. Russ Faria was tried twice for his wife's murder - and convicted - before later being exonerated, and later won a civil suit for his wrongful conviction.

Russ Faria, left, sits beside his girlfriend, Cindy McAfee, as they listen to Lincoln County Prosecuting Attorney Michael Wood's press conference announcing first-degree murder charges against Pamela Hupp for the murder of Russ Faria's wife, Betsy, on Dec. 27, 2011. Russ Faria was tried twice for his wife's murder - and convicted - before later being exonerated, and later won a civil suit for his wrongful conviction.

Very few people in Lincoln County, save for a few transplants, don’t know much about the Elizabeth “Betsy” Faria murder case, for it has captured the imagination of the community for nearly a decade.

A life insurance policy, questionable investigative tactics, and the conviction – and later exoneration – of an innocent man cast a dark cloud over Lincoln County for years – all while the true identity of Faria’s killer was known, but yet to be revealed, nor brought to justice.

However, on July 12, the actual clouds that hovered over the county finally lifted, and Lincoln County Prosecuting Attorney Michael Wood gave the news the people finally wanted to hear: Pamela Hupp was being charged with first-degree murder in the stabbing death of Betsy Faria.

Wood also announced he will be seeking the death penalty in the case against Hupp, saying this was not a decision his office takes lightly, and if any case warrants this type of sentence, the Faria murder case does.

“This case struck deep in our souls in a way not seen,” Wood said during the press conference at the old Lincoln County Courthouse. “This woman murdered for the insurance money, testified against an innocent man and then murdered another man to cover it up.”

Betsy Faria’s husband, Russ Faria, was in the courtroom during the press conference, and said he was pleased by the announcement. He hopes justice will be finally be served in his wife’s murder case.

“I haven’t been a proponent of the death penalty for a long time, but I’ve spoken to Mike Wood about it,” he said. “I agreed with him on this one.”

According to prosecutors, on Dec. 27, 2011, Lincoln County Sheriff’s deputies were dispatched to the Faria residence at the 100 block of Sumac Drive at around 9:40 p.m. Shortly before dialing 911, Betsy Faria’s husband, Russ Faria, discovered his wife’s body in the den with a steak knife in her neck.

When first responders arrived, they found Betsy Faria had died of multiple stab wounds. Autopsy reports showed she had been stabbed 55 times.

Russ Faria provided a detailed account of his whereabouts during interviews with detectives. However, he emerged as the prime suspect in the case, despite independent reliable witness testimony, video from numerous businesses and receipts, which corroborated his alibi.

Russ Faria was taken to trial twice by Prosecuting Attorney Leah Askey for his wife’s murder, but was exonerated in a bench trial in 2015.

The last person to see Betsy Faria alive was Hupp. On Dec. 23, four days before the murder, Betsy Faria changed the beneficiary of her $150,000 life insurance policy to Hupp on the promise Hupp would distribute the money to the victim’s two daughter’s, Leah and Mariah, as well as Betsy Faria’s mother, Janet Meyers.

The probable cause statement goes on to say Hupp stalked Betsy Faria, knowing her chemotherapy schedule, as well as knowing her husband would not be home at the time, leaving her vulnerable.

On Aug. 16, 2016, Hupp shot and killed Louis Gumpenberger in O’Fallon in a twisted plot to deflect investigators away from her involvement in the Betsy Faria murder case. She originally claimed self-defense, and killed Gumpenberger when he tried to kidnap her.

She entered an Alford plea on that charge, which meant it wasn’t an admission of guilt, but a concession enough evidence existed for a conviction – and is currently serving life in prison without parole.

Wood believes he and his prosecutorial team can use the Gumpenberger murder case as ammunition in their case against Hupp. Normally, prior bad acts are inadmissible in criminal cases, however, some exceptions can be made – and Wood is confident this is one of those exceptions.

“It’s a unique position where we’re handling a case where a man was once convicted – and once acquitted – and another man was murdered,” Wood said. “We believe we will be able to use (Gumpenberger’s) murder in our case because it is so tied into our case.

“I believe a judge will allow it.”

The Prosecuting Attorney’s Office has also launched an investigation into how the original investigation of Betsy Faria’s murder case was handled. Wood said it would be an understatement to say the case was “grossly mishandled.”

“The travesty was when the insurance information was withheld from the defense, and they were able to point out Pam Hupp as a suspect at trial (in 2015),” he said. “That’s why the conviction was reversed at the appellate level.”

Information gathered from Russ Faria’s successful civil suit against Askey and the investigators during the case led Wood to his conclusion.

“It’s not illegal to be bad at your job, but if you’re asking people to lie to cover your own inadequacies, then there’s a problem,” Wood said. “You don’t settle for $2 million because you’re good at your job.

“I think the judgment speaks for itself.”

Wood hopes both the Pam Hupp trial and the subsequent investigation can restore the public’s trust back into the law in the county.

“(Lincoln County Sheriff Rick Harrell) put his best people on this, and made this his priority,” he said. “We have to put faith back in the justice system here in Lincoln County, and I think we’re in a position to change that narrative.”

Faria thanked Wood, Harrell and the investigators for not only putting Hupp on trial, but also holding those whose shoddy investigating took his freedom away accountable.

“(This case) shows these investigators are very thorough, and it also shows that the investigators from 10 years ago, even though I won a lawsuit against them, still think I did it.

“The Three Stooges could have seen otherwise, and this proves it.”

Wood said ego and hubris on the part of Askey and her investigators led to mistakes being made, mistakes that hopefully can be prevented from happening again.

“What we have are allegations that need to be looked at,” Wood said. “I’m not saying criminal, but they are disturbing.

“What (Harrell) and I want to do, where previous administrations have not, is to be transparent, whether criminal behavior existed or not. We want to point out how these mistakes happened – and how they can be prevented.”