Former Missouri Gov. Eric Greitens addressed those in attendance at a Trump BBQ fundraiser co-hosted by the Lincoln and Pike County Central Republican Committees on Aug. 12. 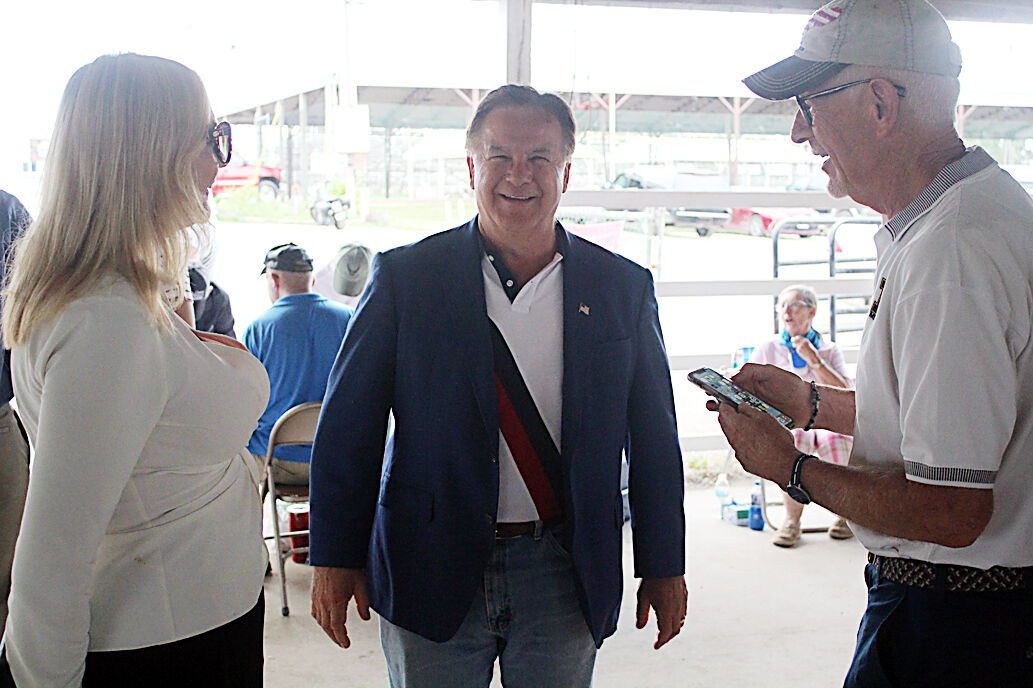 U.S. Senate candidate Mark McCloskey, center, and his wife Patricia, left, talk to a supporter at a Trump BBQ fundraiser co-hosted by the Lincoln and Pike County Central Republican Committees on Aug. 12.

Former Missouri Gov. Eric Greitens addressed those in attendance at a Trump BBQ fundraiser co-hosted by the Lincoln and Pike County Central Republican Committees on Aug. 12.

U.S. Senate candidate Mark McCloskey, center, and his wife Patricia, left, talk to a supporter at a Trump BBQ fundraiser co-hosted by the Lincoln and Pike County Central Republican Committees on Aug. 12.

Not even a surprise storm could keep supporters – and candidates – away from the Lincoln County Fairgrounds on Aug. 12.

Swirling rain and winds gusting up to 65 miles per hour trapped visitors at the central pavilion who came to the Trump BBQ, a fundraiser co-hosted by the Lincoln and Pike County Central Republican Committees, before an interior building was opened to host the rest of the event.

Among those trapped among the eventgoers was U.S. Senate candidate Mark McCloskey and his wife Patricia, the couple who gained international notoriety for confronting protestors in front of their homes in St. Louis. Gov. Mike Parson later pardoned the couple.

The featured speaker for the event, former Gov. Eric Greitens, didn’t disappoint the fans either, driving through the storm to arrive at the fairgrounds around the same time McCloskey was making his campaign speech.

Grietens attacked “critical race theory” and “cancel culture,” saying the government and left-wingers are attacking conservatives’ right to free speech – and silenced former President Donald Trump when he was banned from Twitter and suspended from Facebook.

“They shut people down on social media. They attack (conservatives),” Greitens said. “They threaten their jobs. They threaten them, and their livelihoods, simply for speaking their minds.”

Grietens, however, said it would take a grassroots effort from voters like those who attended the Trump BBQ to turn it around.

Grietens also said the future of the country is at stake, and President Joe Biden isn’t solving the problems the country currently has. He said Lincoln County voters could help change the narrative.

“Has this country been in a harder, tougher place at any point in your life than it is right now?” Grietens said. “Now is the time that we have to stand up.

“Do you know what scares the establishment? You do.”

McCloskey said he never thought about running for any kind of office until Sen. Roy Blunt “wisely” decided not to run for reelection. He said he is a political outsider who entered the arena due to recent events, and said he would not be a tool of outside interests.

McCloskey also pledged to serve just one term in the Senate, if elected, citing he would 72 years old at the end of his first term in office.

McCloskey shared his experience of dealing with last year’s events with the eventgoers.

“We have a little personal experience of what it’s like to live in a one-party system, and we spent a year fighting an unfair prosecution,” he said. “Just last week, Gov. Parson pardoned us, and just yesterday, President Trump sent a letter thanking the governor for having the guts to pardon us for something we did that was perfectly legal – and defended ourselves against a mob that looked to destroy us.”