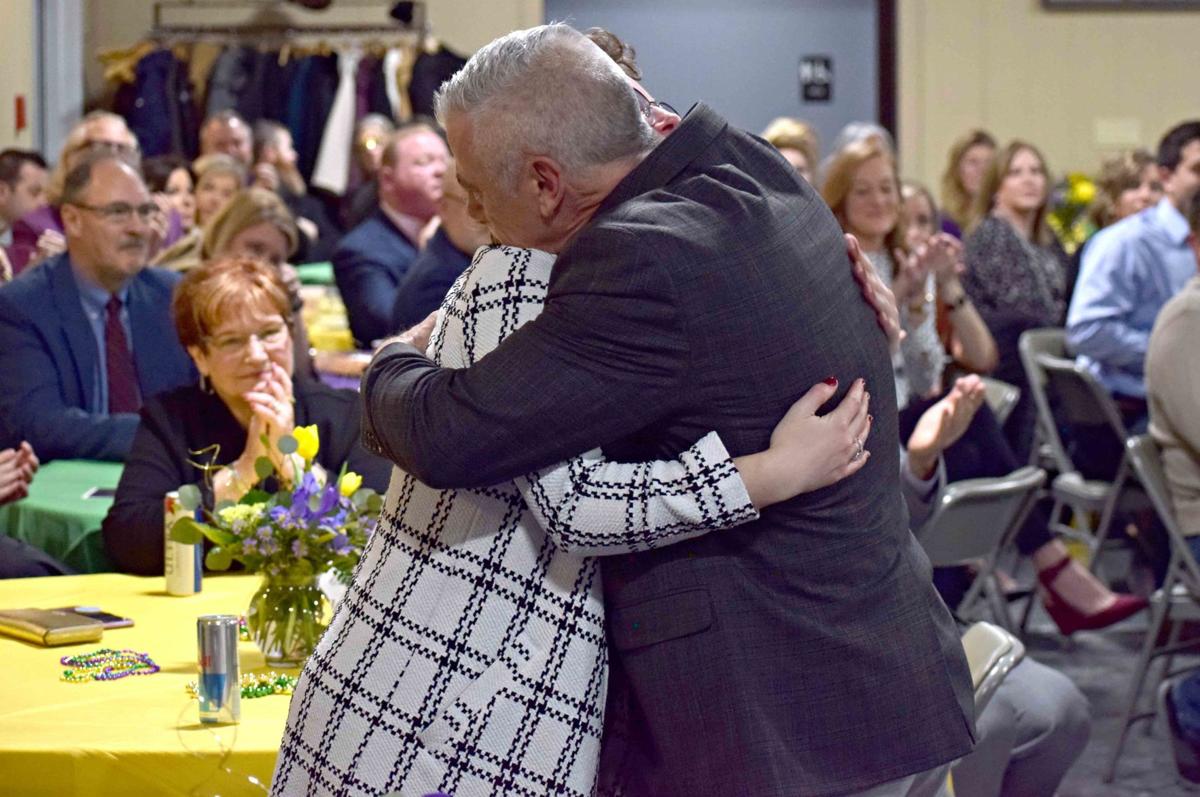 Les Ellison hugs his daughter, Kayleigh Ellison, who surprised him at the Installation Banquet when he was named 2019 Man of the Year.

When Les Ellison showed up at the Chamber’s Installation Banquet, he was unaware that a fast one had been pulled on him.

Just a few days before the Jan. 24 banquet, Judge Pat Flynn called the Ellison house and asked Les and his wife Sonya Ellison to come.

“I don’t schedule nothing, my wife does it all and I do what I’m told,” Les said.

Les said he was told that his friend, Sheriff John Cottle, was the one getting the Man of the Year title, and Les said he’d gone to honor the sheriff.

Les said as 2018’s Man of the Year Casey Hopkins started into his speech announcing the 2019 recipient, he was trying hard not to look over his shoulder at Cottle’s table, as to not give away the “surprise.”

As Hopkins got further into the speech, however, Les started to realize something wasn’t adding up. Hopkins said the yet-unnamed Man of the Year had been married 31 years, and was a realtor – neither of which apply to the Sheriff, who’s only been married for 25 years.

Les said when Hopkins mentioned that the new Man of the Year’s wife was named Sonya, he finally figured out who was getting the award – and that he doesn’t recall much of what happened afterwards.

The Chamber had a few more surprises in store for him, though.

Kayleigh Ellison, Les and Sonya’s daughter, had been hiding in a back room, and snuck out to his table after Hopkins had called Les up to the microphone.

His daughter had just visited home from the east coast, and Les and Sonya were soon expecting to move Kayleigh back from Boston to take the BAR Exam.

“So we had all this planned in our heads, and my wife was being deceitful,” Les joked.

The Ellison’s son, Grant Ellison – who was stationed overseas – also made an appearance through a recorded video to his dad. Everything was such a blur, Les said he had to watch a recording of Grant’s video later on to hear the whole thing.

“The only thing I heard out of [Grant’s] entire presentation that night was ‘get your sunglasses,’” Les said. “Which is a standing joke – I will never tell our children goodbye…we take them to the airport or wherever they’re going, I put my sunglasses on, I hug them and I turn and walk away.”

On receiving the award, Les said he was humbled to be named Man of the Year.

He’s lived in Troy his entire life, other than time spent away at school, and said it’s the people, the community and the connections and familiarity between families that have kept him invested in the Troy and Lincoln County areas.

“Families that may have extreme differences and opinions, yet at the end of the day if you ever need something, they’re going to be the first ones at your doorstep and to support you,” Les said. “I’ve seen that so many times over and again.”

For example, in the last year Les and his family auctioned off a pair of cars for separate causes. Money raised by one went to an American Cancer Society facility, and the other raised funds for the Options For Women in Bowling Green in memory of Bree Johnely, a Moscow Mills girl who passed away in an accident last year.

“Huge community support right there,” Les said. He added that some of his business competitors, people he’s fighting with for listings and  is in competition against, were among the first to step up and support those causes.

The strength of the area is that people always come together for what matters, despite disagreements or arguments.

“And it may take some time, but I’m an optimist, I feel they will,” Les said.

There’s a long list of people Les said he admires in the local community that have always inspired him, from Flynn, to many of his teachers – including Dave Surber, Rick Rhoades, Jim Zuroweste and Sue Riffle.

Joe Witte, Harold and Kathy Cannon were all influential on him as well – and Les said there were almost too many people to mention that have played an important part in his life.

“I look at past [Man and Woman of the Year] recipients,” Les said. “That was the humbling part, those were iconic names in our town.”

First and foremost, he said his mother and Jesus Christ are his biggest inspirations to play a part in his local community. As a relator, Les said he obviously wants to see the county grow, but only in a way that will keep the small-town feel of the community alive.

“I would love to see planned growth and development, but never to a point that we lose the small-town charm and atmosphere that we have,” Les said, adding that he hopes the community will welcome new residents with open arms.

“So that everyone in this community would feel a part of it,” Les said.

Les said he also wants his kids to come back to the area.

“They don’t have to live here, but if they could come back and contribute to the community, that would be huge,” Les said.

Chamber’s Woman of the Year reflects on Lincoln County community

For a long time, Shiloh Werkmeister said she and her husband had a plaque hanging up in their kitchen, which bore a family motto of sorts – on…