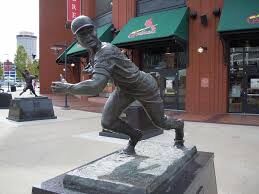 Sculpted by local artist Harry Weber, the statue of Lou Brock welcomes Cardinals fans into Busch Stadium. Brock, a six-time All-Star and eight-time National League stolen base leader, died on Sept. 6 at the age of 81. 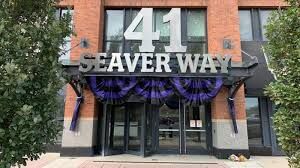 The street in front of Citi Field in New York was renamed for Tom Seaver. Seaver, who won 311 games and three Cy Young Awards, died on Aug. 31 at the age of 75.

Sculpted by local artist Harry Weber, the statue of Lou Brock welcomes Cardinals fans into Busch Stadium. Brock, a six-time All-Star and eight-time National League stolen base leader, died on Sept. 6 at the age of 81.

The street in front of Citi Field in New York was renamed for Tom Seaver. Seaver, who won 311 games and three Cy Young Awards, died on Aug. 31 at the age of 75.

The National Football League might be full swing, but baseball will forever be my favorite sport.

The smell of fresh-cut grass on an asymmetrical field is what has gotten me through spring and the dog days of summer since my childhood. I’m such a nerd of the game that I can recite statistics dating back to the Mesozoic Era of the game.

Instead of going to Daytona or Panama City my senior year of college, I spent Spring Break traveling through Florida hitting up every spring training game I could drive to.

Which is why the last couple of weeks have flat-out sucked. Two of the game’s greatest left us, one a St. Louis legend, the other played for my New York Mets.

Cardinals outfielder Lou Brock died on Sept. 6 at the age of 81. Mets pitcher Tom Seaver, known as “Tom Terrific,” died six days earlier at the age of 75 from complications of dementia and COVID-19.

I was too young to see Brock play at all, and by the time I was old enough to watch Seaver pitch, his prime years had long since passed him. However, their stories are more than worth telling, no matter what age you are.

Every Cardinal fan in this area knows the story of Lou Brock. Chicago gave up on him after three relatively pedestrian seasons with the Cubs, and decided he was expendable after the 1963 season, when he hit .260.

St. Louis was willing to trade for the 24-year-old outfielder, sending the Cubs Ernie Broglio, who was coming off an 18-win season in 1963 – and led the National League with 21 wins just three years earlier. Looked like a steal for Chicago, right?

We all know how wrong that was. Brock would instantly pay dividends for the Cardinals, leading them to three World Series in five years – and a world title in his first season with the club in 1964.

Broglio would be out of baseball by 1966.

In 1967, Brock would become the first player in Major League history to smash 20 home runs and steal 50 bases en route to leading the Cardinals to another World Series championship in seven games over the “Impossible Dream” Boston Red Sox.

While Brock and St. Louis were dominating the National League, the last-place Mets were catching lighting of their own in a bottle in the form of a 23-year-old flamethrower named Tom Seaver. With an electric fastball, the righthander from California won 16 games to win National League Rookie of the Year honors in 1967.

After St. Louis’ dominance ended with a loss to Detroit in seven games in the 1968 World Series, Brock’s last trip to the postseason, Seaver would win 25 games in 1969 to earn his first National League Cy Young Award and lead the “Miracle Mets” to a world title over the Baltimore Orioles.

It wouldn’t be the first time their careers would overlap. In 1977, Brock would steal the unstealable: Ty Cobb’s record of 892 stolen bases. That same year, Seaver would post the last of his five 20-win seasons.

After tossing five one-hitters in 11 years in New York, Seaver finally got his no-no against Brock and the Cardinals as a member of the Cincinnati Reds in 1978.

Brock retired in 1979 after reaching the 3,000-hit club against his former team, the Cubs, but you Cardinal fans already knew this. After all, it happened against Chicago.

A month after Brock was inducted into the National Baseball Hall of Fame on his first try in July of 1985, Seaver earned his 300th win as a member of the Chicago White Sox. Seaver would join Brock in the Hall in 1992.

True fans of the game here in the St. Louis metro, and across the country, know we lost two of the all-time greats in a very short period. 2020 has claimed more than its share of casualties thus far, and it’s sure to claim more.

I, instead, prefer to imagine Seaver throwing his insane fastball past Brock, wherever they are now. Maybe Brock reaches on that pitch, and steals second on him, like he did on so many of the game’s greatest hurlers.

This is the way we should all choose to remember our heroes.