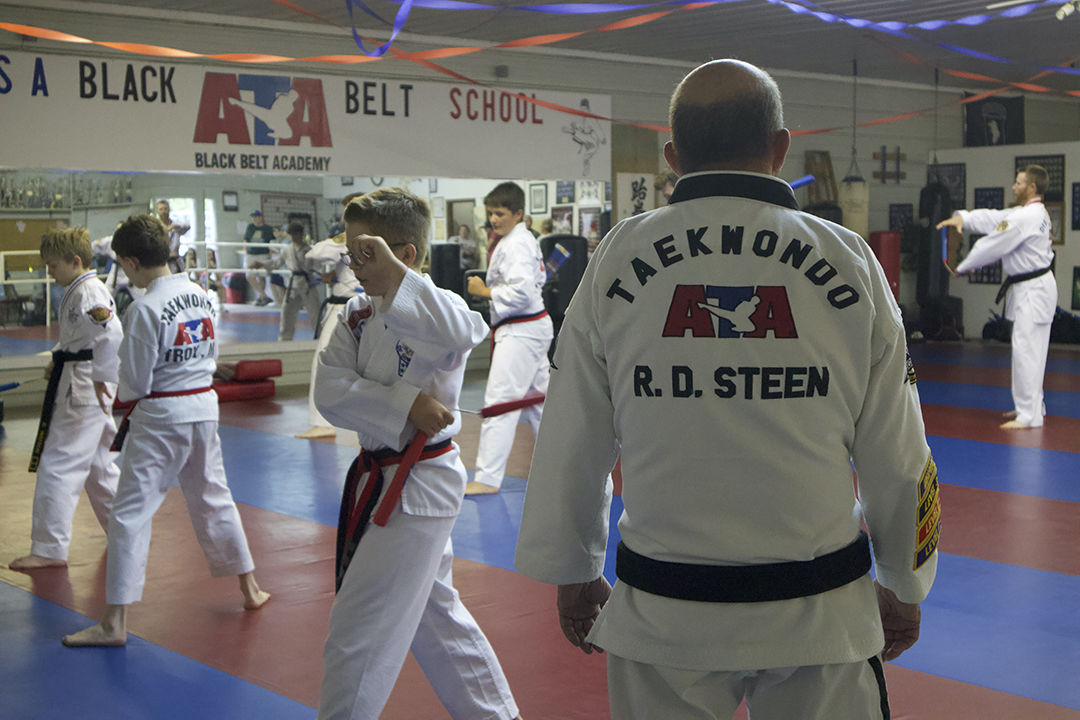 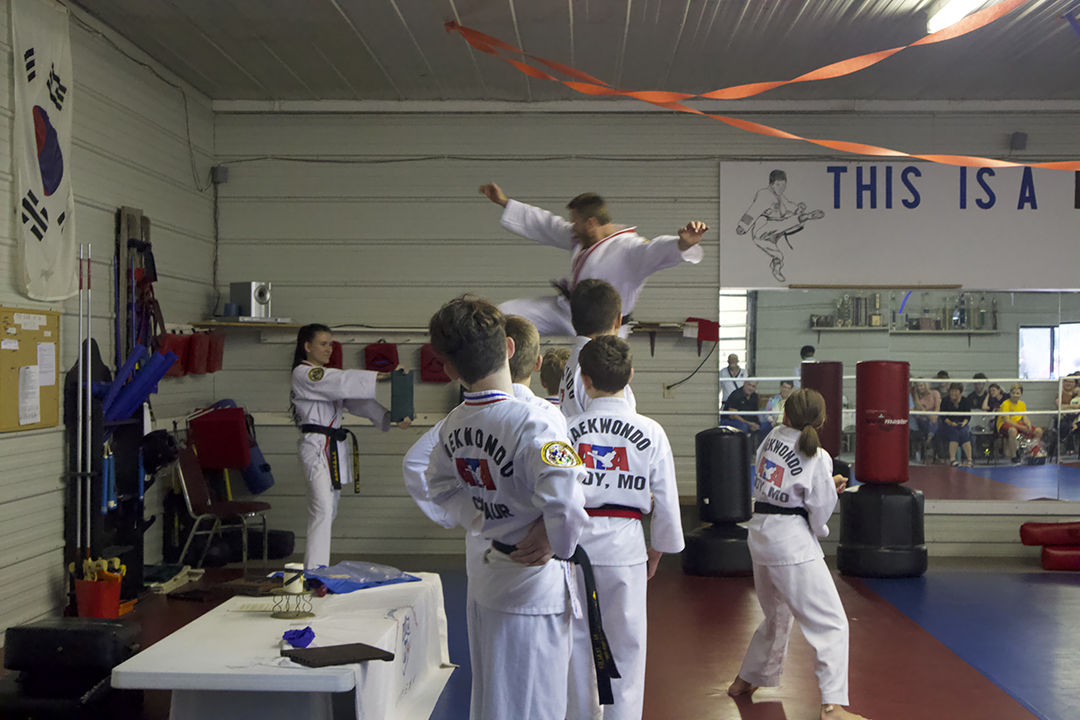 Brian Simko jumps through the air for a final board kick during the Black Belt Academy's last class.

Brian Simko jumps through the air for a final board kick during the Black Belt Academy's last class.

Richard Steen spoke the words, voice thick with emotion, on Tuesday night- ending his 31 year career as a Taekwondo instructor and the last class of the Black Belt Academy. His words were met with applause as friends and family, many of them former students, filled the martial art school’s rectangle building for a surprise party to commemorate the moment.

“I see a lot of faces that I’ve taught.” Steen had addressed the slowly growing crowd earlier during the class. “It’s been my joy and my pleasure to train these kids, and you kids, and you dads of kids and moms of kids, and it’s been my honor and a blessing. You guys have no idea. Y'all think that you come in here and you learn from me. You have no idea how much I’ve learned from you guys. I appreciate it, God bless you all, thank you.”

As more familiar faces showed up during the last class, Steen- 71, who holds a 5th degree black belt through the American Taekwondo Association (ATA) and has been a certified instructor since 1989 - went into the crowd to hug and connect with friends and former students. June 30 marked the official closing of his school that he’s run in Troy since he got his instructor certification. Nicole Rogers, one of the current assistant instructors who has attended the academy since she was 8, worked over the last few months to organize the last hurrah, reaching out to old students on a facebook page and successfully keeping the whole endeavor a secret from her retiring teacher.

“Mr. Steen’s my hero.” Rogers said, voice choked with sincere emotion. The 24 year old earned her second degree black belt last November, and said she’s always found her way back to the academy even after breaks for college and life. “He’s probably the kindest person you’ll ever meet. He wanted to retire last year, but he wanted to make sure everybody got through to black belt first. He didn’t want to quit on anybody.”

True to word, Friday, June 19 was the school’s last testing day where the several remaining students that didn’t have it yet tested for their black belt. A black belt ceremony, originally planned for the last day of class but rescheduled due to shipping delays, will be held this week to acknowledge results. Mr. Steen initially thought the large crowd was just there for the black belt ceremony. After a picture was taken of all the current and former students- around 40 people collected on the dojo mat- Steen grabbed a katana to cut the cake.

“He was really fun. Like out of nowhere we would just do something fun, and it was weird but it was great.” Katheryne Mcrae said, a former student commenting on having Mr. Steen as a teacher. “He taught me that nothing can ever be perfect- which seems like a bad thing, but that means you can always keep working and improving.”

“He’s helped us out more than anyone else would. He’s cared a lot for us.” Palmer Berneking said, a current student and great nephew of Mr. Steens.

“Mr. Steen, he used to be really strict. He laxed a lot since he had less kids.” Zachariah J Schult said, a current student commenting on his teacher’s retirement. “We focused less on technique and more about life lessons. I’m happy with that because I can always go and learn technique from someone different but life lessons are usually in the moment.”

Many current and former students of all ages commented that the most important lessons they learned from taking Taekwondo with Mr. Steen was discipline and respect.

“I came back to the ATA 12 years ago because of Mr. Steen, and now I’m running 2 schools.” Joel Clark said, a former student who started taking taekwondo classes with Mr. Steen when he was 16 and explored other schools of martial arts afterwards. Several of Mr. Steen’s students will transfer to Clark’s school in Wentzville. “ I just remembered him being a great martial artist, and being the embodiment of what a martial artist should be as far as having respect and commanding respect. I remember what good it [martial arts] did for me as a teenager and I wanted to do the same thing for kids that Mr. Steen did for me.”

“A traditional martial art is designed to help grow better people.” Mr Steen said, “People with respect, courtesy, focus, a can do attitude, learn how to set goals for themselves. And those kind of teachings I teach, hopefully will roll out into school and into their work and into their life.”

Richard Steen started learning Taekwondo when he was 34 because he liked the stretching exercises his kids were learning when they went to the martial arts class.

“the family that kicks together kinda sticks together.” Mr. Steen said, “We always have something in common to talk about and do, so that was a big plus.”

Eventually the Steens moved to Troy, and while Mr. Steen kept going to St. Louis to train, customers at his barber shop asked if he could start teaching them. With permission from his instructor, Mr. Steen got his instructor certification and opened his school in 1989.

“I started on the corner of Cherry and Main Street, second floor over Ernie Steiners photography studio. There was no air conditioning, and it had two coal oil heaters. I had to carry 5 gallon buckets of coal oil up the steps and light them every winter day and it was great, cold, miserable…- but it was great!” Mr. Steen said. The school moved to its current location in the mid 90s, and during his peak season, 2000-2015, Mr. Steen taught class 4 nights a week, 4 hours a night and averaged about 80 students at any given time, even getting up to 105 at one point.

Mr. Steen said that when he started, there weren’t a lot of schools of martial arts to choose from. But, he learned how to kick and went on to place 3rd in the Taekwondo World Championships in the early 2000s, after maintaining state champion status for several years in form sparring and weapons. However, while Mr. Steen said he enjoyed competitions as the chance to test skills against others and develop friendships, he maintained that it was only one part of the experience.

“Martial arts teaches you confidence and goal setting. How to treat people, it teaches you about respect. Because if you’re punching and kicking and choking people you gotta respect them and not hurt them.”

Mr. Steen is also passionate about Taekwondo being a form of self-defense. Through the years his school has held many one-night women’s self-defense classes, often taken by young ladies ready to head off to college. When teaching, he clarifies to kid and adult students alike that they are there first and foremost to learn how to defend themselves.

“You're here to learn how to fight so you don’t have to. If you learn to walk in confidence with your eyes wide open, you can 9 times out of 10 avoid any problems or confrontations. Use your brain, learn to use your head, learn to pay attention to your surroundings. Your awareness is real important and that’s what this teaches. How to be aware of your surroundings.”

In more recent years, Mr. Steen has experienced firsthand the health benefits of Taekwondo, as he had a quadruple bypass and hip replacement both in the past 3 years and in both cases he stayed in the hospital less than 3 days after surgery.

“Exercise and also confidence and a good positive mental attitude goes a long way to overcoming things like that. You don’t let them get you down, you keep getting back up. If you don’t get up, you won't.” Mr. Steen said. However, “It’s time to retire.” Mr. Steen said with a laugh at an earlier class, though he plans to stay involved with the Taekwondo community by judging at tournaments and testings.

Pat Steen, Richard’s wife, shared that while running the school could be aggravating with it’s extensive time demands, she wouldn’t give it up.

“The memories, and like I said with the classes, watching these kids grow up, even the adults. Watching the adults seeing what they can do. They surprise themselves. Everyone can do more than they think they can.” Pat said, “By and large it’s been a blessing for both of us.”

Roland Murdock, a 6th degree black belt holder who runs a school in Granite City, Illinois, met Mr. Steen at a martial arts tournament in 1995 and Steen later helped him learn his 4th degree forms. Murdock said that while his belt may be higher, he still respects Mr. Steen as his senior, not because of his age but because of the dedication in his heart. That dedication was known throughout the community, as Murdock experienced first hand years after knowing Mr. Steen.

“I used to work for the army corps of engineers… [occasionally] at lock and dam 27. Some of the guys there did not know I was in the martial arts and when they found out that I was they said “well you need to go over to Troy and meet this little short bad*** guy. Yeah, Mr. Steen.”

“It’s bittersweet.” Brian Simko said on Mr. Steen’s retirement, an assistant instructor with his 2nd degree black belt who has been taking classes on and off at Steen’s Black Belt Academy since 1994, coming back eventually with his own kids.

“Mr. Steen has done a fantastic job for this community. He’s touched so many lives around here, and he’s really built a legacy for himself, and we’re certainly going to miss him.” Jason Mcbride said, a former student.

“It’s a little bit sad, but I’m happy for him. Everyone deserves a happy retirement. He’s given so much of his time and life to help others, and I just really hope he enjoys his retirement.” Amy Van Horn said, whose family was former students but now run a martial arts school in Warrenton.

“Sparring with him and he does that little twist kick, kicks you in the gut. Because he comes out there with no gear on and you're sparring him, and then he goes ‘wa-cha!’. He’s tricky.” Mark Van Horn gave a final fitting favorite memory of the man who’s left a significant mark on the hearts of many.