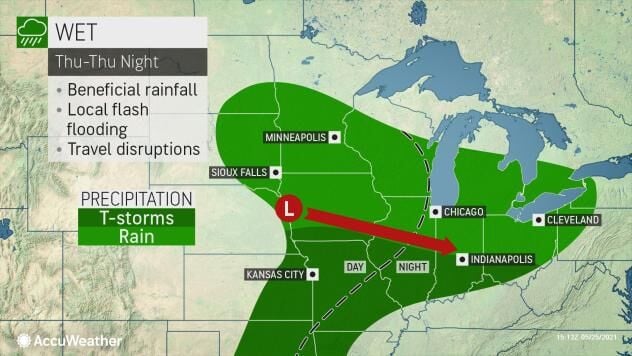 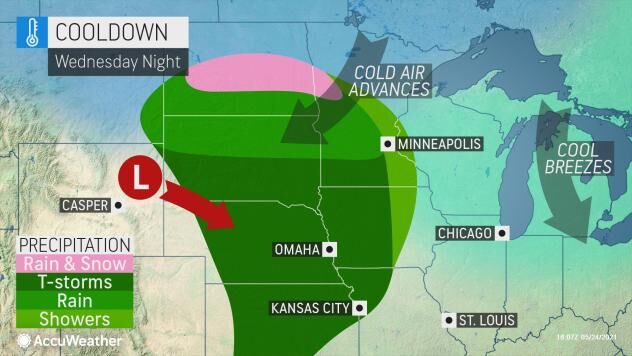 AccuWeather meteorologists are tracking a slow-moving storm that is likely to put a damper on Memorial Day weekend in parts of the Midwest and Northeast.

The storm will not only keep conditions cool for the unofficial start of summer but could also trigger travel-disrupting rainfall over the holiday weekend.

The storm arrived along the Pacific Ocean then pushed across the northern third of the western United States on Tuesday night. It will trigger showers and spotty thunderstorms as it moves along. As this system pushes east of the Rockies on Wednesday, it is likely to become energized.

The storm will tap into moisture from the Gulf of Mexico as it moves eastward along a zone where clashing air masses -- with cooler air to the north and hot and muggy air to the south -- will collide. It will advance across the Midwest Wednesday into Thursday and then the central Appalachians and mid-Atlantic Friday into Saturday. Eventually, the cool air will sweep southward in the wake of the storm with relief for those in the Southern states enduring an early-season heat wave.

On the storm's cool northern side, clouds are expected to be thick, and steady rain is forecast to fall for a time. Where the steadiest rain falls will depend on the exact track of the storm.

As the storm shifts across the northern Plains, the steadiest rain is likely to fall on drought-stricken areas bounded by Interstates 90 and 94, which includes portions of eastern Montana, the Dakotas and southern Minnesota Wednesday to Wednesday night.

Nancy Pelosi asked about special relationship with the UK

They escaped the Taliban. Now, they're stranded in a foreign country

Then, a large complex of severe thunderstorms is forecast to develop just south of the steady rain area and could hit areas along I-80 especially hard in Nebraska and Iowa from Wednesday afternoon to Thursday morning.

On Thursday, the rainy portion of the storm is forecast to push through the Midwest. Cities such as Minneapolis, Chicago and Milwaukee are expected to pick up at least some rain from the storm.

Temperatures during the rain in much of the Midwest, central Appalachians and mid-Atlantic will be unseasonably cool for the last days of May. Much of the time temperatures are forecast to range from the 50s to the lower 60s F. Average highs this time of the year in the rain zone are in the 70s. Not only will an umbrella be a necessity for those heading out or spending time outdoors, but also long sleeves and jackets or a fleece, AccuWeather forecasters say.

South of the swath of steady rain, thunderstorms are forecast to rumble from the central Plains to the middle part of the Mississippi Valley, the Ohio and Tennessee valleys, the southern Appalachians and Chesapeake Bay region as the storm moves along from Thursday to Friday.

Storms may become especially violent with the risk of tornadoes in the warm and humid air over the southern Plains on Thursday.

Even though the main part of the storm is forecast to move slowly off the mid-Atlantic and southern New England coasts over the weekend, a secondary feature associated with the storm may continue to cause trouble across parts of the Midwest and the Northeast.