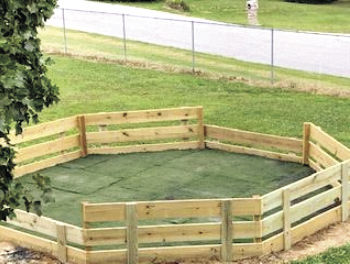 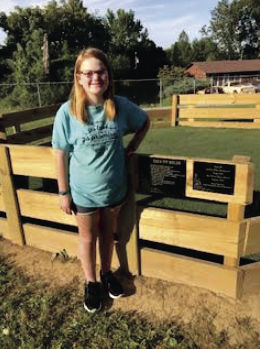 Abby Beckemeier next to her Gaga Pit, an octagonal dodge-ball arena.

She is a seventh grader at Winfield Middle School, and is a member of Troop 4932.

Abby chose to build a Gaga Pit at Winfield Intermediate School. She had to present her idea to the Winfield School Board for approval first. Several materials were donated by Baxter Gardens West in O’Fallon, Old Monroe Lumber Company in Old Monroe and the Winfield R-IV School District.

She learned many valuable lessons while working on the Gaga Pit.

She learned carpentry skills, how to use hand tools, measuring accurately is important, complex math skills and how to install turf.

What is a Gaga Pit? It is an octagon shaped pin where dodge ball is played.

The players are hit below the knees to be out.  It is a fast-paced game. The students at Winfield Intermediate School have been playing the game without the pit.  Abby wanted to make the game easier and more under control.

The Girl Scout Silver Award is a 50-hour service project that is completed during the Cadette level of Girl Scouts. A Cadette is in grades sixth through eighth.

The award can be individual or as a team. Abby is in a multi-level troop, so she completed the project on her own.  She did recruit the help of her parents and sisters when needed.  The rest of her troop earned their silver award the year prior.