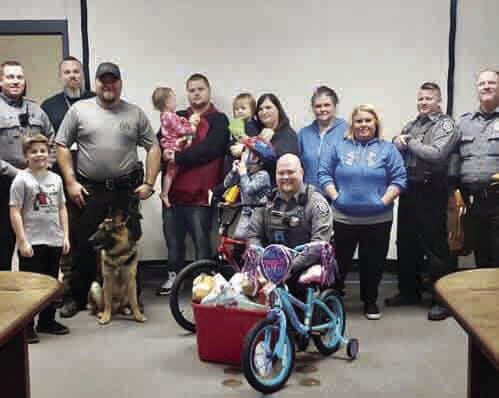 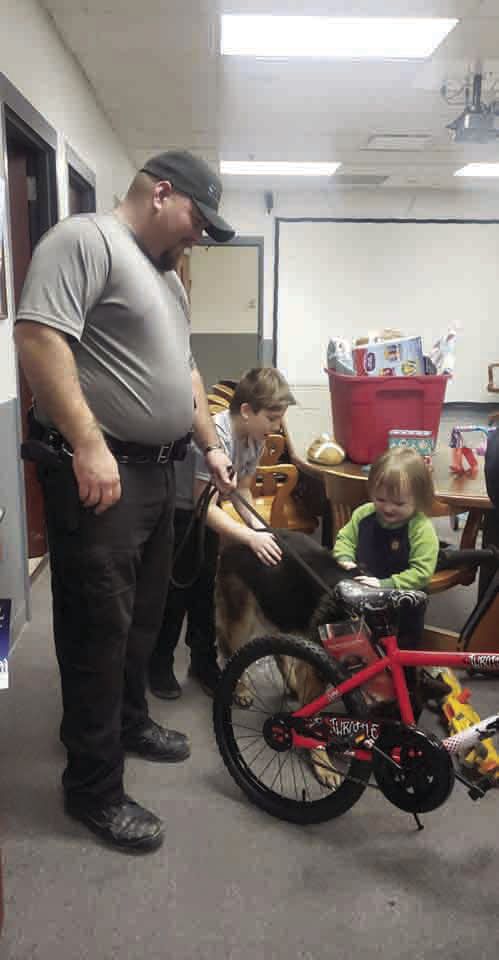 The Lincoln County Sheriff’s Office (LCSO) and STL Youth Sports have had a fruitful, ongoing working relationship for several years now, and this holiday season, they teamed up again to provide a Lincoln County family in need with presents. On Dec. 23, they provided a family in need with some Christmas cheer in the form of sporting equipment and toys for the children.

STL Youth Sports provides a wide variety of sporting equipment that the Deputies with the Sheriff’s Office can pass out to youth throughout the Lincoln County community.

LCSO Deputy Ryan Parker said that through his office’s relationship with STL Youth Sports, they’ve served somewhere in the ballpark of hundreds of families.

“We help hundreds of families around the county. We do our best to pass out to as many families as we can get ahold of. It reaches more from not just these certain events, obviously this was a holiday thing, we work with families everyday that we come to work,” Parker said.

Aly Kaelin-Higgins, a Troy citizen, was also at the heart of this holiday giving.

“This family had reached out on Facebook and I’ve always been the type of person, every year, whether we struggle or whatever, we like to help families in need. This mom, they were going through a hard time, her and her family. So I collected a bunch of stuff from when I coupon and my kids’ toys and stuff like that,” Kaelin-Higgins said.

She knew that the LCSO, and specifically Deputy Parker, were involved in charitable events such as this, so she reached out to Parker about the family.

“I got with Deputy Parker and told him about this family and asked if they would be willing to help out as well. I had the family meet with us at the Sheriff’s Office. We met in the training conference room and we gave them their gifts there,” Kaelin-Higgins said. Parker, who has been involved with several community outreach events with STL Youth Sports, commended Kaelin-Higgins mentality towards charitable giving.

Parker said, “Aly is a citizen that’s wanting to reach out and help the community in whatever way, shape or form that she can. She enjoys helping families, she enjoys helping kids and she is the one that has been reaching out to me with families who she is aware of that are in need of things like that.”

Kaelin-Higgins has a very clear reason why she is working towards involving herself in more of this type of work moving forward.

“Our youth is our future. I certainly believe that our main focus needs to be on our youth and I think that we need to steer them to be positive and to learn to give and do good things in life rather than lean on drugs or Xbox or whatever,” Kaelin-Higgins said. She had her own son, Aiden, help with this recent project to re-enforce to him that “it isn’t about getting, it’s about giving.” Kaelin-Higgins said that she feels it is alarming how many first-hand instances of children in the community not getting the necessary amount of attention from parents she has seen.

And she wants to work to change that.

“There’s a lot of kids that live with parents in the community that don’t really pay attention to them,” Kaelin-Higgins said.

One idea she spoke on, for example, was the idea of a “school safe zone.”

“If we can take one of these abandoned buildings out here in Lincoln County and open it and call it School Safe Zone and make it a place where kids can go after school. There could be board games, books, free tutoring and games. Then every other Saturday, we could do a food pantry. And we could run based as a not-for-profit,” Kaelin-Higgins said.

She said that people like Parker, along with herself, see the potential in making the Lincoln County community a better place for everyone.

“That’s my biggest thing is that I don’t want kids to fall back on drugs, suicide or whatever. And that’s the rate we are going at. These kids are influenced by things and they are not being kids. They aren’t learning the proper ways of life,” Kaelin-Higgins said. “I want to be the voice of these kids.”

That is just an example of an idea of how Kaelin-Higgins wants to add to the community to strengthen it.

She said that when her family lived in Warren County, there was a similar after school space for children.

She said that in the time that that facility was around, she noticed decreases in criminal activity, suicide rates, bullying rates, drug use and runaways, because kids had somewhere to go.

“This Christmas was my start this year. I want to be able to give the kids the best situations,” Kaelin-Higgins said.

She said that she has already received more donations and that she plans on continuing her partnership with the LCSO, in order for them to reach the families most in need.