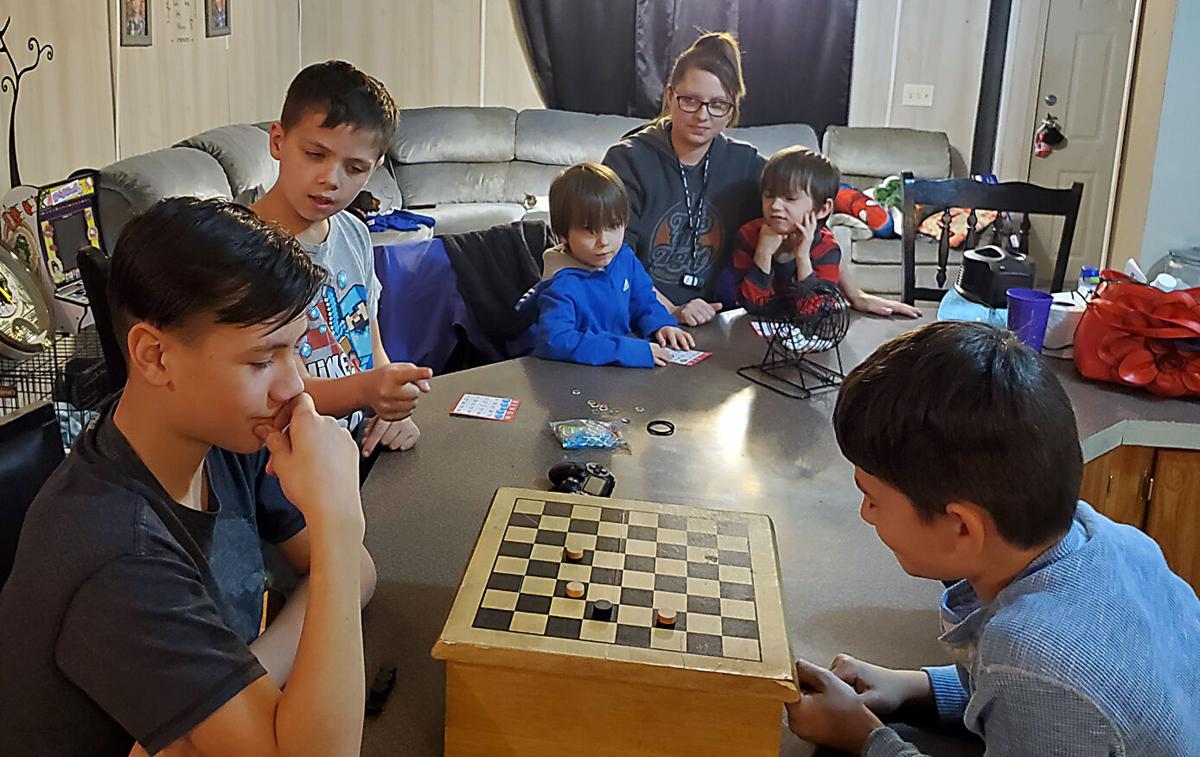 Kristen Laurell, center, watches her two oldest children, 13-year-old Kaden, left, and 11-year-old Conner, right, play checkers, while holding her six-year old twins, Nekoda and Isaiah. Nine-year-old Tristen stands next to Kaden watching his next move. Laurell has overcome the tragic loss of her twin sister, Ginny Horner, and an abusive relationship before graduating as a medical assistant and moving her children into their own home. 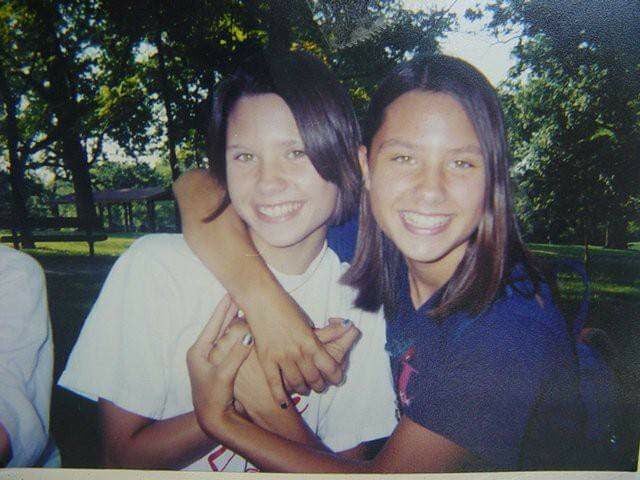 Laurell, right, embraces her twin sister, Ginny Horner. Horner was severely injured in a car accident on Oct. 1, 2004, and later taken off life support when they were both 17 years old.

Kristen Laurell, center, watches her two oldest children, 13-year-old Kaden, left, and 11-year-old Conner, right, play checkers, while holding her six-year old twins, Nekoda and Isaiah. Nine-year-old Tristen stands next to Kaden watching his next move. Laurell has overcome the tragic loss of her twin sister, Ginny Horner, and an abusive relationship before graduating as a medical assistant and moving her children into their own home.

Laurell, right, embraces her twin sister, Ginny Horner. Horner was severely injured in a car accident on Oct. 1, 2004, and later taken off life support when they were both 17 years old.

In a very short lifetime, Kristen Laurell has weather a lot of storms.

Death, divorce, domestic abuse and single motherhood would cause most people to throw their hands in despair.

However, the 33-year-old Troy native and resident refused to allow the slings and arrows of outrageous fortune to get the best of her.

“I am very proud of the person that I am today, and I hope that my boys can see how hard I worked for this life that we now have,” Laurell said.

To get to that life, Laurell had to endure a great deal of hardship, beginning with a life-altering tragedy. On Oct. 1, 2004, Laurell’s twin sister, Ginny Horner, was mortally wounded in a car accident in rural Lincoln County.

Laurell and her family had the hardest of all decisions: taking their loved one off life support.

“At 17 years old I had to make one of the hardest decisions of my life. I was losing someone who I had been with since conception,” Laurell said. “I wasn’t ready to let her go, but I knew if we had kept her she wouldn’t have any quality of life.

“We were making the right decision.”

Laurell said her sister’s funeral was a family affair, with her parents and grandparents making the arrangements. Laurell picked her own best outfit for her twin to wear, as well as making the funeral CD.

However, she wasn’t the same person after Ginny’s death, becoming reclusive and eventually dropping out of Troy Buchanan High School during her sophomore year before returning to take GED option classes and graduating.

Shortly after, Laurell had her first son, Kaden, with her then-fiancee, who was serving in Fallujah during the Iraq War. When he came home, they were married in January of 2008 and moved to Fort Leonard Wood, but life still wasn’t the same.

After the birth of two more children, Conner and Tristen, Laurell and her husband divorced. Laurell found herself a 24-year-old mother of three with no home and no job.

She left her children with their father, while she got back on her back on her feet. It was at this point Laurell met another man who she quickly moved in with. He turned out to be an mentally abusive alcoholic – and within four months of meeting him – she found her pregnant again, this time with twins.

At this point, Laurell decided to take control of her life with help from someone who was no longer there – her twin sister Ginny.

“I couldn’t have her on earth with me anymore, but I could be a mother to twins. It honestly made me feel stronger, and so I reached out to a twinless twin support group on Facebook,” Laurell said. “I was getting the help I needed from others just like me. It felt good to finally say how I was feeling and coping without being judged, and these people knew exactly what I was going through.”

However, there was one more complication, one that threatened her life, and the lives of her unborn children.

“Through my pregnancy I noticed something wasn’t right with my hands and feet. I was scratching uncontrollably,” Laurell said. “I called my doctor, and he had me come in and draw blood. The next day he called and said we had to deliver the babies immediately.

“I had cholestasis of the pregnancy, and my body was poisoning my babies. I was so scared of losing them because they were being born seven weeks early.”

Though she gave birth prematurely, Laurell had a pair of healthy twin boys, Nekoda and Isaiah.

Eight months later, the time had finally come to act on what Laurell always wanted: to go to college and finally gain her independence. She enrolled in classes at Midwest Institute in Earth City, and after the twins’ first birthday, she ended her relationship with their father and moved back to Lincoln County, settling with her mother in Elsberry.

Now with custody of all five of her children, Laurell got a job in St. Peters, and continued taking night classes at Midwest, three times a week. Nevertheless, she was determined to make this venture work.

“I’d get up at 5 a.m. and get my oldest son up and ready for school, and we were both out the door by 7 a.m. I’d go to work for eight hours, then haul butt to Earth City to make it in time for classes,” Laurell said. “I’d get home around 11 p.m. and do my homework, study, eat dinner and shower and hopefully be in bed by 1 a.m. I’d repeat this process every day.

Three months later, I saved enough money to rent my very first home, a small two-bedroom, one-bath home in Elsberry. It was a tight squeeze for me and five kids, but I made it work for a year.”

All the work and sacrifice paid off, because in May of 2015, Laurell graduated as a medical assistant, just missing honors status.

With only what’s best for her family on her mind, five years later, she was able to move her family into a four-bedroom, two-bath home.

During the pandemic, a conversation with her stepmother led Laurell into looking into a new career. After volunteering with the local school and taking some courses, she landed a new job with the Lincoln County R-III School District last October, and now she believes education will be her final landing spot.

“I’ve talked with my step mom about pursuing a degree in teaching,” Laurell said. “I found that I really love it, and every day that I’m working for our schools, I’m happy and it’s a great day, so now I’m looking into colleges to start my next and final career.”

As Laurell looks back on a long, tragic, frustrating and often, lonely, road, she looks backs as a reminder of where she came from. But she looks forward to a bright future ahead, with her family – and without regrets.

“I look back on my life, and I can’t believe that in 16 years, I have endured everything that I have and I pushed through – and I’m still here,” Laurell said. “I battled losing my twin, PTSD, depression, abuse, being a single mother and college, and now I’ve gotten my own home, and looking into getting a teaching degree.

“I wouldn’t be where I am today if it weren’t for my family and friends, and the support from the twinless twin support group.”

For Kristen Laurell, the storm has finally ended, and the rays of sunshine have found its way through the clouds.