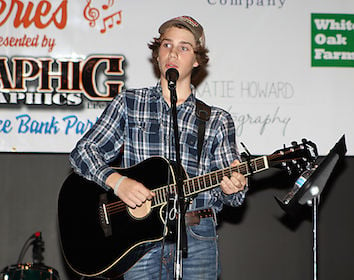 Mother Nature did her best to dampen the first of three Summer Concerts in Elsberry last Saturday, however, that didn’t stop the fun of a night full of country music.

After showers most of the morning the Elsberry Community Growth Association (ECGA) made an announcement that the show must go on, just in a different location. ECGA president Sam Byers, Vice-President and Concert Chairperson Adam Heitman and member Brennan Lagemann made a short video letting fans know that the event was being moved to the Elsberry Community Center on South Third Street.

That announcement made it’s way throughout the community like wildfires as social media was a buzz and the effects were evident as the center was filled with fans ready for some country music.

Local boy Jesse Vaughn (right) started the night off with many older country favorites. Vaughn performed songs from Hank Williams to Alan Jackson and everything in-between.

The feature attraction was Lincoln Count native Jake Shafer, who is making his second appearance at the Summer Concert Series. Shafer once again provided the crowd with numerous country classics.

“The event was a success given the fact that the changes had to be made. The turnout was great. Lots of dancing. All the vendors did well even with the last minute change,” said Heitman. “Jesse was awesome. You could see a lot of potential in his performance in front of a good size crowd. Jake is definitely on a trajectory to big and better things and I feel we are lucky to have him perform with us.

Numerous vendors were also on handing selling food, desserts and drinks for those in attendance. This year’s event is being presented by Graphic Graphics, LLC in Elsberry. They have been joined by numerous other sponsors to help bring the series back to Elsberry

“Thank you to everyone for coming out and enjoying a Saturday night with us,” said Heitman.

The next concert is set for July 20 starting at 5 p.m. with performances by local band Los Tontos (classic rock) and The Midnight Piano Band.